You are here: Home » About us » Press releases » PANOS – 25 years in news and pictures

PANOS – 25 years in news and pictures 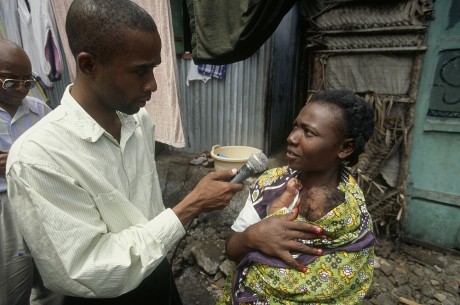 Media houses are competing to cover global events with squeezed budgets, limiting what they can report from the ground. Local journalists from developing countries can fill that gap while offering a new perspective on international reporting that not only informs but brokers positive change. After 25 years, it’s time to open the door to developing country journalists, Panos London said today.

International news reports offer a glimpse into what is happening in developing countries but the voices of people most affected by development issues often go unheard. Panos London believes that the views of poor and marginalised people are required to give greater insight into their lives and offer unique perspectives on the challenges they face. Journalists from developing countries offer a local context for global stories as they can reach remote places to interview hard to reach communities.

Since its official origins in 1986 through Earthscan and Gemini News, Panos London has worked on producing original, high quality journalism about life in developing countries that includes the opinions and voices of people most affected by some of the most pressing development issues: climate change, HIV and AIDS, global trade and finance, food security, migration and conflict.

For 25 years, along with the rest of the Panos Network, Panos London has been working with the media and other communicators to foster debate on under-reported, misrepresented or misunderstood development issues.

“Given the media remains the public’s primary source of information about world affairs, its role is crucial in building understanding about the critical issues facing people in developing countries. Our philosophy is to ensure that journalists play their part in creating content that informs and represents the voices of people who often go unheard.

“We have had 25 years of supporting media in the developing world to produce quality content that generates critical debates and change. Our journalists go where western journalists rarely venture, asking officials questions that more often represent the concerns of a local community. The future will see reporting and analysis from journalists in the South on a par with regional correspondents of national papers, offering opinion, analysis and a fresh and honest global viewpoint.”

Panos London has worked with hundreds of journalists around the world through mentoring and fellowships to ensure they have the technical knowledge on development topics and editorial skills to write high quality content for local and international audiences.

“As a journalist based in Kabul I have always felt the need for more regional voices reporting from the region to bring perspectives that are not always easily accessible to a wider western audience. While Panos London helped place my stories in the initial phase, I am now able to connect directly with some of the media I have been introduced to and interest them in my work.”

The charity has equipped journalists with technical knowledge through fellowships offered by the Climate Change Media Partnership (CCMP) with Internews and the International Institute for Environment and Development (IIED). The CCMP has been running for four years, enabling 40 journalists to attend the United Nations Framework Convention on Climate Change conference each year.

The Linking Southern Journalists to European Media project, now in its final year, has helped equip developing country journalists to write for European audiences through mentoring and direct commissioning from national newspaper editors in the UK, Sweden, Poland and Spain. The project has successfully published features by developing country journalists through its work with partners such as The Independent and The Guardian in the UK, Svenksa Dagbladet in Sweden, El Mundo in Spain and Gazeta in Poland.

Panos London also recognises the valuable role and need for photojournalism, offering the development community and media access to visual stories about people around the world without prejudice.

Panos Pictures, a commercial entity, was born out the photo archive of Panos London in 1986 and is now a globally recognised brand representing 100 photojournalists. It has just added six more photographers after a recent global call for new talent.

Its 25th year has seen Panos photographers win an unprecedented seven World Press Photo awards, a huge achievement for a small independent photo agency in an era of consolidation among big picture libraries.

“We believe in the photography of ideas. Not content with merely witnessing, Panos photographers seek out stories that matter with the aim of interpreting rather than simply recording. We are not afraid to take a position on current events or contemporary issues and offer perspectives that challenge commonly held assumptions. We are delighted to have come this far and will continue to move with the industry by becoming a full range visual communications agency, taking people on a journey they didn’t originally anticipate.”

A percentage of the annual profits from Panos Pictures is given to Panos London (which part owns the photo agency) to further its work in advocacy and media capacity building.

Panos was born in 1986 making 2011 its 25th year. The charity has been producing original, high-quality journalism about life in developing countries that includes the opinions and voices of people most affected by development issues since it first opened.

Panos London promotes the participation of poor and marginalised people in national and international development debates through media and communication projects.

The Panos Network is a dynamic global partnership of eight independent institutes held together by a common mission and set of values.

Panos Pictures is a photo agency specialising in global social issues, driven by the vision and commitment of its photographers and staff. Panos is known internationally for its fresh and intelligent approach and respected for its integrity and willingness to pursue stories beyond the contemporary media agenda.