You are here: Home » About us » Press releases » Women are key to tackling inequality and global poverty in developing countries says Panos London 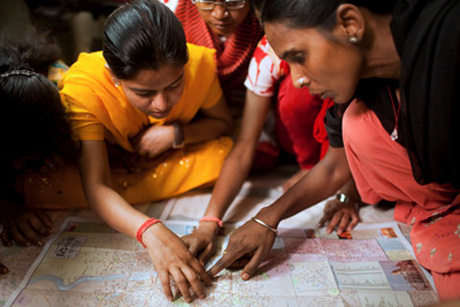 Economic pressures are encouraging more women to challenge taboos and find success in roles traditionally held by men in some developing countries, says Mark Wilson, Executive Director of Panos London. To mark the centenary year of International Women’s Day on March 8, Panos London has produced a case study media pack profiling extraordinary women from around the world who have taken on roles previously deemed just for men.

Breaking Barriers: Women in a Man’s World is a showcase of exceptional women who are breaking stereotypes to change their own lives and inspire other women and girls around them. The media pack features mothers who have become builders in Brazil, a Ugandan fisherwoman who has broken into the traditionally male fishing industry on Lake Victoria, an all female taxi service in Delhi, a woman union leader in South Africa and Afghanistan’s only woman governor.

Mark Wilson, Executive Director, Panos London said: “Women have traditionally played a crucial role in the progress of their families but are now pushing for a level platform by breaking taboos and inspiring others to do the same. Whilst we know there is some way to go for developing countries to meet the Millennium Development Goal 3 targets, there are outstanding examples of triumph that help point the way forward.

“This media pack has been produced by Panos London to show that anything is possible if people are enabled to make a contribution. The women profiled in this pack demonstrate that they can overcome inequalities that hinder access to education or work. These case studies are testimony that female empowerment is one of the most important factors in speeding up the rate of change in societies around the world.”

Raquel Barros who teaches construction skills to women in Sao Paulo, Brazil said on the response to more women joining the trade: “We can see that the prejudice is slowly giving place to the recognition of their work, even in such a masculine field of work. Now people are recommending their services because they are meticulous and better organised than the men.”

The Millennium Development Goals (MDGs) are the most broadly supported comprehensive and specific development goals ever agreed upon. MDG Goal 3: Promote Gender Equality and Empower Women specifically examines the role of women and girl’s participation in education, politics and economics.

To receive Breaking Barriers: Women in a Man’s World and for media enquiries or images please contact Tia Jeewa on 020 7239 7616 or on email tia.jeewa@panos.org.uk. You can also download it from here.

MDG Goal 3: Promote gender equality and empower women
Educate girls and women. Educated girls tend to become women with greater economic independence. They have an increased ability to negotiate and bargain in home, community and economic life. Educated girls and women tend to participate more in public life, and they can manage natural resources in a more sustainable manner.

Overcome barriers to schooling for girls. There has been tremendous MDG focus on expanding enrolment in primary school. But these gains for girls are often lost in the transition to secondary school due to lack of separate, private, safe girl’s sanitation facilities, sexual harassment or violence at and en route to school, and due to the need for curriculum reform and teacher training for higher quality schools with greater relevance to girls’ lives.

Promote mechanisms that give women a voice in politics and governance institutions. These mechanisms can vary widely from proportional representation systems that increase the probability women will be elected, to more transparent political party selection processes, public funding for campaigns, and more. But in countries around the world, women in politics are strengthening the credibility of democracies through their participation, reinvigorating political accountability, and contributing to improved efficiency in policymaking through bringing their diverse perspectives.

Enact and implement equal economic rights for all. Legislation on equal pay for equal work, free choice of profession or employment, equality in hiring and promotions, leave and unemployment benefits, freedom from sexual harassment in the workplace, and other critical rights are increasingly being legislated. But weak implementation of these laws continues to constrain women’s equality and empowerment.

Panos London promotes the participation of poor and marginalised people in international development debates through media and communication projects. It is part of the worldwide Panos Network of independent institutes working to ensure that information is used more effectively to foster debate, pluralism and democracy.