You are here: Home » Our work » Current projects » Beyond Consultation 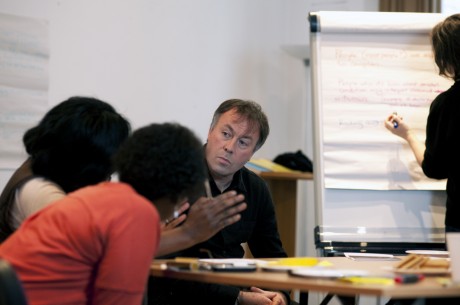 Beyond Consultation was a three year partnership between Naz Project London and Panos London which aimed to involve young Africans in shaping Sexual Health and HIV/AIDS services in the boroughs of Lambeth, Southwark and Lewisham in order to help develop more effective services that respond to the needs of the community. The project sought to build relationships and dialogue between services users and staff to help improve services, which in turn should help to improve their health and well-being.

The project provided an opportunity for African men and women to communicate their own priorities rather than simply being consulted about what health service providers think are their needs. The project has been working with a group of 12 African women of various ages and a group of nine young African men who have sex with men. NHS staff from different South London health trusts were also involved to get a picture of the key Sexual Health and HIV issues for them as providers of services.

The project was based on a set of principles regarding what makes a meaningful and effective engagement process:

Beyond Consultation took staff and service users through a series of stages in order to identify and address any issues with services. Three groups were formed: African men who have sex with men, African women and staff from sexual health and HIV services. Each group was involved in workshops to articulate their own experience and priorities. The groups of service users identified priority issues they wanted to raise with staff, they then worked to produce materials (posters, audio interviews, digital stories) to help convey their concerns.

This was followed by a cross-group dialogue where  stakeholders met to review the issues which have arisen and to consider potential areas for change. Two areas of concern in particular were identified to take forward within the project: improving understanding, trust and practice around the confidentiality of personal information for living with HIV and working towards improving the quality of support letters written by doctors for social service referrals.

A peer enquiry stage followed where interviewing and an online survey were used to access the views and experiences of a wider group of service users and staff who might otherwise be unable or unwilling to take part in a service user engagement process. Finally staff and service users used all the material to work collaboratively towards service changes.

Many of the issues raised during the project related to the wider social and structural barriers that African migrants encountered and which impeded maintaining good health or accessing services. These barriers such as stigma and discrimination and problems with housing and employment were of as much, if not more, concern to participants than the engagement with services.

Panos London and Naz Project London have produced a guide for commissioners detailing how to establish a meaningful and effective service user engagement process. The guide is based on the Beyond Consultation method and is particularly intended for the engagement of seldom heard groups.

We would like to thank the service users and NHS staff who participated in the project as well as the Beyond Consultation advisory group and the African Advocacy Foundation who generously provided in kind support and meeting space.

The Beyond Consultation project and resulting guide were funded through the Department of Health’s Voluntary Sector Investment Programme: Innovation Excellence and Strategic Development Fund. We also received financial support from Peter Moores Foundation to support the development and dissemination of the guide.

One woman living with HIV talks about the importance of her faith in living with her condition and the challenges of tackling stigma and discrimination amongst Muslims.

An interview and photography slideshow looking at one woman’s experience about trying to find work while living with HIV. She describes the feeling of vulnerability that she encounters, even in such innocuous situations as taking a bus ride.

A young African gay man talks about what happens when you go to get tested for HIV. He challenges the appropriateness of some of the questions he finds discriminatory and can stop African men from getting tested.

Panos London, working with Naz Project London, is pleased to announce a new publication – Beyond Consultation: a guide for health commissioners.

Posters & stories from Beyond Consultation

During the Beyond Consultation project participants from an African women’s group and a group for young African men who have sex with men produced some materials intended to communicate their views, concerns and priorities to NHS staff from sexual health and HIV services. These posters and short audio and video clips were intended as conversation…

Beyond consultation: a guide for commissioners

Bringing service users and health staff together to shape and improve services and to identify and test practical changes is no easy task, but it is a valuable process.