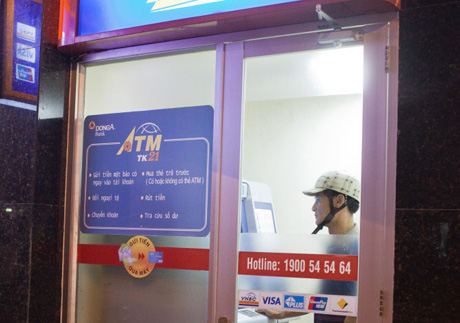 ATMs are no longer the only way for people to access money, with mobile phones being used more and more for money transfer services / Martin Roemers - Panos pics

1.4 billion have access to cell phones – it is for this reason the poor ‘unbanked’ are now being viewed as viable customers for mobile phone companies and banks offering mobile phone money transfer services. In this article an editor from Panos London offers some of the topics that you could explore in relation to banking, money transfers and ICT.

Financial services have long been out of reach for the poor living in the developing world. Statistics reveal nine in ten people, many of whom live in rural areas, do not have access to savings, insurance, deposits and remittances services.

Yet 1.4 billion have access to cell phones – it is for this reason the poor 'unbanked' are now being viewed as viable customers for mobile phone companies and banks offering mobile phone money transfer services.

Transferring money through the use of mobile phones acts as a means of storing value on an account linked mobile phone handset and can be used to transfer funds to people or merchants, or even access loans or insurance products. Local agents make it possible for those in remote areas to access the cash.

Although mobile money transfers are at an early stage of development, things are moving fast. In the Philippines the two larges phone operators, SMART Communications and Global Telecoms, have launched mobile banking solutions aimed at poorer customers. Pilot schemes are also underway to deliver micro-credit loans through the use of mobile phones in places that lack banking services.

In March 2006, Global Telecoms had approximately 1.3 million registered users for its G-Cash payment system. SMART Money which offers most of the same services enables over 1 million Filipino workers overseas to transfer almost 50 million US dollars to their relatives in the Philippines (DFID, 2007).

In addition to money transfers, mobile phone companies have been discussing the development of 'Stored Value Accounts' (SVA). In Japan where SVA have already been implemented you can purchase a drink from a drink dispenser by pointing the phone at a terminal and transferring money from the SVA.

Development researchers are concerned by the cost of money transfer services. The UK's Department for International Development (DFID) issued a report highlighting that the average cost for global money transfers is at a fee of 12 per cent, and the lower the amount of money you send the higher interest rate. Such high fee rates means migrants sending money home are losing a substantial sum of money.

In response to this issue, DFID commissioned a report to encourage competition among money transfer operators to ensure openness and lower costs.

Mobile phone transfers like other ICT services are vulnerable to fraud and computer hackers. Those who do not have a bank account or need help in transferring money through the use of an agent may also be susceptible to theft.

Bring it to life