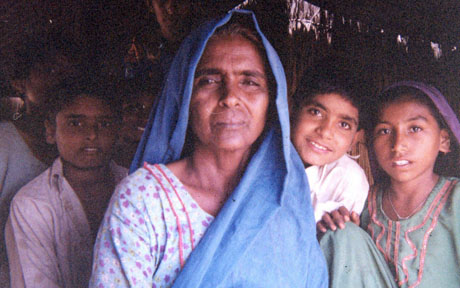 Basran: 'We have no livelihood… there are only small fish. We now survive by begging'

More than 20 people share Basran’s small family home on the edge of Manchar Lake. The house is in bad repair; once it is mended, she says, they can think about arranging marriages for their remaining unmarried children (in times of extreme poverty her family has”sold” daughters in marriage).

Basran explains that the lake’s water quality has been declining for more than a decade. The pollution has destroyed their livelihood, and adults and children suffer constant ill-health; several have died from water-borne diseases.

Her story contains numerous illustrations of the poor’s lack of power – from “humiliation, insults and cruelty” to abductions of women from poor families, including her own. She describes their lives as “daily death”; if the government cannot improve their circumstances, she says, it should put them out of their misery with “poison pills”.

We have been living here since the beginning. Seven generations have lived and died here… We, who are standing on the edge of death now, have seen our hair grow white here.

Today again, my mother-in-law has an upset stomach and is vomiting. This is an injustice to us: the water of Manchar has turned to poison. Children go to bathe in this water and…even if one drop of this water enters their mouth, they will lose their lives…

Recently three of our women, who each had eight-month-old babies, died due to the poisonous waters. In our homeland (Manchar), there is only misery for us… We have no livelihood… there are only small fish. We now survive by begging.

In the times of our forefathers, the water was so sweet that if you…drank water out of the small hollows left in the ground by the cattle’s footprints, even that was sweet. The water has been bad like this since the last 10, 15 years… now even dogs will die if they drink it, let alone human beings…

“Our livelihood is connected to this water”

Manchar’s water is absolute poison… our livelihood is connected to this water, but this water is not for drinking… the fish come from this water, but they are very small… They used to be [large] before, but not any more… the small fish fetch 2 rupees per kg…If we cannot catch them, we just sit around hungry…

The traders come here to take the fish from us. What do you get from selling fish at 2 rupees per kg, Amma? You don’t just have to fill your stomach from this: you need beeri (cigarettes/tobacco), matches and also you need clothes. Amma, our needs are not met from it.

Our men, at the most, catch 2 maunds (1 maund = 37.5 kg) of fish in a day, and the amount they get for one maund is only 80 rupees. Even the labour of 10 men in a household is not enough [income]… We do not even earn enough money for tea. On top of that I am building my own hut… The house has to be made. We collect material – twig by twig – to make a nest, and strong winds blow and destroy it…

“We send the men out and they beg”

Fishing is not done every day. When there is no fishing, we borrow from other people to survive. We tell them, “Lend us some money; our children are hungry and crying.” If they give it then well and good, otherwise we send the men out and they beg here and there, and bring something or other. Then the children get something to eat. Amma we are very miserable. Only God is our support. If we catch fish, people want their share from this also.

I smoke beri (cigarettes) and also hookah (smoking tobacco through pipe or bowl). Sometimes there is money for the beri, sometimes not. I smoke on credit. If I cannot get beri on credit, I use the hookah at home… I kg of tobacco is 40 rupees, which barely lasts a week… Out of all the family, only my mother-in-law and I smoke tobacco. My mother-in-law remains sick. Amma, there is no livelihood. We are just passing away our life.

We have a television… There is no electricity, but we watch the television with a battery and see plays, news and other programmes… I am not educated but our boys read the newspaper. My son reads the newspaper and tells me, Amma, this news is in the paper today.

Amma, the basic reason for [the poor getting poorer and the rich getting richer] is education. Rich people find jobs after completing their education. Some of them have agricultural land. We are just fishermen. We are surrounded by misery all the time. The people with jobs and the landlords, they all live in the city. They earn there. What are we, Meer Bahar (fisherfolk)? We just have fish to survive on…

The life of our elders was better than ours. They caught the same fish, but they used to be bigger and they sold at a higher price. But it is not like that anymore. Our children are also not happy.

To store drinking water, we have made these three, four tanks. But they are all lying empty. We get water for only one tank, and that too only after we have made a lot of noise and protested, or blocked the road… they give enough water for just one day.

All the people fill up their matkas (earthenware pot), drums and coolers with it. They then use this water day and night. When these small matkas become empty, then there is no water for three, four days. In this situation, we fill up with water from a village belonging to the Jamali tribe [from Baluchistan], which is some distance from here.

Three, four years ago we migrated to another place. But we got nothing there except humiliation, insults and cruelty…[so] we came back. Whatever fish we caught was snatched away from us by the people there, and they are the ones who also abduct our women. These same people have forcibly taken away three of our women.

We pleaded with them, but who listens to poor people? We told them that if they take away our women, then according to the custom of the area, at least give us some money in exchange. They don’t even give that. They are very powerful people. We poor people cannot compete with them.

My daughter-in-law was one of the women. I brought her home after marrying her with my son, and not even a month had passed when they abducted her. Next month it will be eleven months since my daughter-in-law has been their captive. They are not giving her back…

The powerful are outside the law

These people take away our poor men by enticing them with hopes of a livelihood – and then abduct their women. This way we are facing great hardship. If we had any money we would have gone to some influential person or the police, and tried to get our women back by giving money to them. But we do not have anything.

We tried a lot [to get help]. If someone takes away your child, how can a person sit quietly? Except for breaking the stars from the sky, we have tried many different ways. We beseeched and implored them. Took the Quran to them. What else can we do besides this? But nobody listens to us. ..

“When we are starving we sell our girls [in marriage]…”

Yes, we visit each other [for marriages]. We also go to those who live on houseboats [on the lake]. If someone is getting married there, people from here load up in a boat and go there. And if there is a wedding here, then they load everything up in small boats and come here.

Girls are given for dowry or for money. And sometimes given, without any money, to close relatives… we only marry among ourselves… But when we are starving we sell our girls… Amma! There is no work. That is why, to fill our stomachs, we sell our girls to others, for a few thousand rupees…

Grownup girls and boys are sitting unmarried. If there was money we would get them married. First we must get our house ready and then we will think about their getting married. Look at my house: it has fallen down… it does not have a roof…

When a girl reaches puberty, she is married off. Amma, I will not lie to you: girls are also married who are not old enough. The custom here is to marry them when they are very young… We get our daughters engaged at the time of birth. When she matures, we tell her in-laws, “Your girl is now grown up, come and take her now.”

The mother is definitely asked [for her opinion]… the girl or the boy does not refuse… If it happened, the men would beat them with sticks until they bathed in their own blood… No one will say that I do not want to marry the other person. But sometimes if the parents feel that the girl or the boy is too young, then the match is changed.

“We even eat bad fish”

We have had many happy times in our lives – children were born, then they started growing up. After that, I had sleepless nights. At one time we also had agricultural land. The water used to be sweet, that is why we got a lot from it. This way our life was passing well… Now we don’t have anything. If we catch a bird, we even eat that now…

While we still have breath, we are going to feel hungry. To try to survive, we even eat bad fish [even though] we feel that our insides are on fire. To quench our thirst we go to the dirty water. The grownups, somehow or other, manage to survive the poisonous water, but the children do not.

“Our sorrows are too many”

I fished from a very young age. As our ancestors did this work, we also do it. And when they grow up, our girls will also do this work. We work at it all the time. We do not have our own land. We just have Allah’s support. The government should help us.

Our waderas (feudal leaders) are helpless; they are not landlords so they do not have much influence. Our waderas are poor, so even if they go and speak on our behalf, nobody takes any action. Here the rich have their own way…

I implore you – if you can talk somewhere, on our behalf, for our rights, well and good, otherwise send some poison pills so that we can take them and die… Our sorrows are too many…

All we have to say is that, either the Government should help us, or kill us… we do not want the type of life like the one that we are living. The government should help us [or] they should give poisonous injections to the 2 lakh (200,000) people of our biraderi (family group) to kill them – so that they are free from this daily death.

Basran: desperate times is produced as part of the Living with poverty: Pakistan oral testimony project.

The cost of poverty