You are here: Home » Resources » Oral Testimonies » El Nour: inside my heart 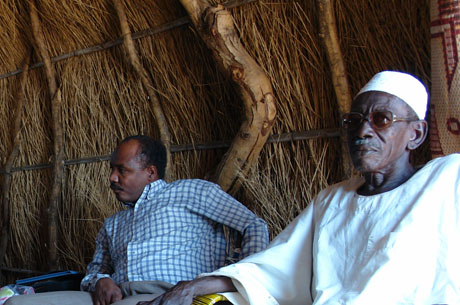 El Nour: 'The area then was full of animal wealth'

Now in his late 60s, El Nour has vivid memories of life before the great drought of 1984. Then, wildlife flourished on well-forested land. Now, the gazelle and other animals that people hunted have disappeared, along with the livestock that provided him with a living.”I possessed about 300 head of livestock, and now I have nothing. This is a fact, and I feel shame to say it.”

Although an uncle wanted to support his education, his father needed his only son to help with their cattle. Following the loss of their herds, El Nour became a migrant labourer for other livestock owners. He finds it hard to leave behind his wife and six daughters, and feels their presence”inside my heart.”

Although his wife also works – harvesting sesame and selling merikh (a shrub) – their daughters’ school fees remain a major burden. The family has moved from the old part of El Ihemrat, which was covered by the encroaching sand dunes, to the new site.

With the advent of drought people lost their animals and wellbeing. I possessed about 300 head of livestock, and now I have nothing. This is a fact, and I feel shame to say it. I sold my livestock for fear it would die, due to the non-existence of any pasture.

The past was richer

I am 68 or 69 years of age and was brought up among my forefathers. The area then was full of animal wealth – cows, sheep, goats and camels – in addition to the dense forest, specially in the villages of El Ihemrat, El Besheri, El Taweela and El Shawallee, where there were so many trees and grasses that wild animals like foxes, wolves and other animals, good for hunting, were found. The people of El Obeid hunted gazelle in this area. And there were no sand dunes.

My uncle Ismail was the head of a court and registered me in the school, but my father refused to educate me, claiming that I am his only son and he was in need of me to graze the animals. My uncle insisted, but my father refused – he even cried. I didn’t get an education, but I found a great number of livestock.

Also we were producing dura (sorghum) in great quantities then, and millet… But now there is no dura due to the encroachment of the desert, which has buried the soil. Hence the land is unproductive and the woods have vanished…

Working away from home

During the drought year of 1984, I sold [my livestock], migrated away and worked for a livestock exporting company…and I sent money for living expenses to my parents and children. There were people from all sorts of tribes, like Hawawir, Dar Hamid, Bani Garar and the Kababish. All these groups migrated to Omdurman in the Abu Zaid area, which was a desert. It is where we work. Some of them migrated to El Obeid and others to Bara.

I was working as a herdsman, feeding the animals and guarding them. My monthly salary was 150,000 Sudanese pounds in the drought year of 1984. Then I went with the same merchant to Ed Daein (a major commercial town in Darfur) in the season of Kharif (autumn; July-October) and we bought livestock and returned to Omdurman overland. I continued working [this way] for two or three years after the drought.

[Then] my father…became crippled. I took him to El Obeid Hospital…I stayed at home to look after my father. Thanks to God, the operation was successful. But one year later, he was [again] unable to move…five years [later] he died; he was 105. The Almighty bless him.

[I stayed in Omdurman] for about four or five years with the same merchant, then I worked with a livestock exporter from Kurti, of the Bediria tribe, in animal grazing for two years… But recently the position completely changed due to the weakness of livestock production… I was working for the trader as a broker, [mediating between buyers and sellers of livestock,] or as a herdsman in the yards where the animals are kept for sale and export. But for more than three years I have been suffering from poor eyesight.

The pain of absence

[Being away was hard.] I feel [my family] inside my heart. If I was drinking milk, I remembered them, and I sent them money continuously. I have six daughters. My mother and my wife [look after them]… they were not in need of anything, because I sent money to them as soon as I could…

The eldest are Madina and Amna, and the other two are Batool and Halima – students in Bara Secondary School in the boarding house. Khadiga and Aasha are learning in Milaha Primary School… It is about one and half hours from our village. Recently my wife went to harvest sesame… She [also went out] to collect merikh (a shrub) and to sell it in Bara market. The girls’… upbringing was good. But the older girls left school in the eighth grade due to lack of capacity [to pay fees].

Yesterday Khadiga was dismissed from school after they claimed [we owed] 5,000 Sudanese pounds. I wrote a letter to the school, in which I confirmed that I haven’t this amount, and told them that I will pay it later…they dismissed her again, and now they are claiming LS 10,000 for the two daughters. I sent LS 5000, so then they allowed them to continue their education.

Relocation of the El Ihemrat villages

IFAD [drilled the wells]. And they brought the neem (Azadirachta indica) and hashab (Acacia senegal) trees, but the desert has buried them. The Minister of Agriculture visited us three years ago and we enlightened him about our problems, and he asked us to leave this village. We refused. Then he asked us to choose another site. We chose the present site…[and] agreed to transfer the three El Ihemrat villages to one place.

Then they planned it and specified the school location and the streets, with a width of 15 metres, with the participation of IFAD and Bara local government. They imposed 10,000 Sudanese pounds as a contribution from everyone, planned the school, El Maseed (Quranic college, for advanced students), the Khalwa (Quranic school), the health unit and the first aid sites… [The health unit] didn’t get built.

I went…to the present site after the digging of the well and the planning of 112 houses… My old house comprised four gutteia (round room with conical roof) and three rakouba (open shelter, made from wood with grass roof), but now I have two gutteia and one rakouba…because I have no money for construction and there is no wood to use for building. [But] I prefer this place, because it is easy to reach – the road to the old village is very rough and it badly affected lorries, let alone [those of us] going on foot, or by camel or donkey.

El Nour: inside my heart is produced as part of the Desert voices: Sudan oral testimony project.