You are here: Home » Resources » Media Briefs » Feeling the pinch: impacts of the financial crisis on developing countries 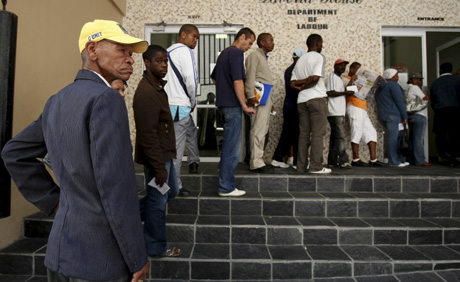 New research highlights some of the impacts that the global financial crisis is having on developing countries. Here unemployed people queue for their unemployed insurance fund (UIF) in Elizabeth, South Africa / James Oatway - Panos pics

According to recent studies it is the world’s poorest who will be hit hardest by the global recession. There have been many reports on how developed countries have been affected by the current financial crisis, but new research, which has come out in the past few months, has shown how the global downturn is hitting developing countries.

This topic guide will be looking at research from several different sources, exploring what information journalists, and editors, might find useful from each of these research reports.

Triggered by the burst of the US housing bubble, in 2007, the global financial crisis led to a domino effect across the globe as the problems in internationally-linked financial markets caused a collapse in credit and demand leading to recession. In a globalised world, in which many economies are increasingly linked as a result of the removal of barriers to trade, investment and finance, problems in one country will inevitably affect others.

Research has shown that the effects of the global financial crisis have varied between developing countries. The impact of the recession depends on the degree to which countries are integrated into the global economy. According to ActionAid’s report, Where does it hurt? The impact of the financial crisis on developing countries, three variables determine the levels of integration. These are:

The global financial crisis has led to a further questioning of official approaches to globalisation and development. Non-governmental organisations such as ActionAid have long since criticised the so-called ‘Washington Consensus’ policies prescribed by international institutions such as the World Bank as bad for development, arguing that they have left many developing countries highly vulnerable to external shocks such as the financial crisis. But when UK Prime Minister Gordon Brown told the G20 summit of powerful nations in April 2009 that “the Washington Consensus is over”, a sure sign was provided that crucial debates are emerging on economic governance and international development.

Some research has called for a re-thinking of global economic institutions and the creation of growth strategies that work for both rich and poor countries. The Overseas Development Institute (ODI) Briefing Paper 54 recommends policies such as reforming global governance systems to include voices of emerging and developing countries and diversifying these nations’ economic base to spread reliance on more export sources.

Other reports have sought to raise debate about the role of the state in times of financial crisis, reworking in this challenging new environment recent policy disputes about the relationship between governance, economic growth and development. One interesting contribution is the UN Conference on Trade and Development’s The Least Developed Countries Report 2009, which argues for a new approach to governance in pursuing development.

UNCTAD claims that many international policy-makers and donors have promoted an “overambitious, unrealistic good governance agenda” as an end in itself, causing an overload in institutional reforms, and lost sight of the need for governance that delivers effective gains in economic development, livelihoods and living standards. And, as pointed out by the Institute of Development Studies in its commentary (Is Good Governance Good for Growth?), UNCTAD’s report argues that “some countries have constructed an effective ‘development state’ without implementing the traditional donor package of good governance”.  Interestingly, however, UNCTAD calls for a “new developmental State” in its critique of governance approaches associated with an allegedly limited focus on “freeing markets”.  It notes that gains achieved by developmental states in the past were often criticised for involving authoritarian practices at a democratic price. In advocating the need for “governance for development”, UNCTAD says that values such as participation, transparency and accountability must be upheld.

Often it is easy to overlook social issues as some variables are not easily quantifiable into statistics. Naomi Hossain’s study on Crime and Social Cohesion in the Time of Crisis: Early Evidence of Wider Impacts of Food, Fuel and Financial Shocks examines how communities in five developing countries have been affected. This study is a qualitative analysis of people’s experiences of crime and social cohesion in the time of crisis. People in all five countries believed that crime rates had risen in this period. Social issues such as crime and social cohesion are important to address as they can lead to widespread insecurity amongst communities and even onto a national level. The food riots in Haiti are one such example.

The key issues section in this page will address how the global financial crisis has affected developing countries’ economy, policy, governance and social well being.

The financial crisis will affect the economies, policies, governance and social well-being of developing countries. These four main aspects are explored below, each one based on particular recent research findings. Further reports and papers offering different conclusions and views on these key issues can be found at the resources/links section of this page.

Impact on the economy:

The ActionAid report found that countries that were dependent on external trade for development and liberalised capital accounts were highly vulnerable to the recession. China has highly controlled international finance and so has been cushioned against some of the worst impacts of the recession, despite falling export volumes. The report assert though that South Africa, on the other hand, which adopted a strategy of extreme openness to the global economy in terms of external trade and loose international financial controls, now looks to be in a highly risky position. The report found that:

The shortcomings of the current international financial system have also been recognised by actors that argue in favour of the benefits of open economies such as the World Bank. According to its Global Monitoring Report 2009, advanced and developing countries need to take comprehensive action to resolve liquidity and solvency problems in the banking system. The policies needed to strengthen the financial system are:

This report asserts that trade has been a powerful force in developing countries for growth, poverty reduction and progress towards the MDGs. So maintaining and improving access to international markets is vital to the development agenda.

The Overseas Development Institute’s (ODI) research Briefing Paper 54 looked at ten developing countries in 2009 to see how the financial crisis is being felt on the ground. The research suggests that poor countries have been hit harder than was originally predicted and that the crisis could be an opportunity to re-shape global economic institutions and rethink growth strategies, ensuring these systems works for both rich and poor countries, and to ensure that global growth is more resilient to crises and that it does not fail the poorest. Some policy recommendations from the ODI’s report include:

The role of the state in times of financial crisis has been a point of great debate since the recession and many reports say it needs to be redefined. In the case of UNCTAD, The Least Developed Countries Report 2009 argues that it should lead to the promotion of good development governance, that is, ‘governance which effectively delivers development’. Governance is about the processes of interaction between government and societies. Development governance, or governance for development, UNCTAD argues is about creating a better future for the members of a society by using the authority of the state to promote economic development and structural transformation. The approach proposed by the report involves:

Impact on the social:

Social well-being is difficult to quantify into statistics. Qualitative and participatory studies such as Naomi Hossain’s Crime and Social Cohesion in the Time of Crisis: Early Evidence of Wider Impacts of Food, Fuel and Financial Shocks examines how shocks affect societies. The report studies rural and urban communities in five countries: Bangladesh, Indonesia, Kenya, Zambia and Jamaica. The study examines how the 2008 food and fuel crisis and subsequent financial crisis have affected crime and social cohesion amongst these communities.

Questions to ask politicians, or policy makers, about the financial crisis

Questions to ask local people about the financial crisis

Questions to ask NGOs about the financial crisis

Questions to ask businesses about the financial crisis

Global financial crisis: refers to the failure of businesses worldwide, declines in consumer wealth, and a significant decline of economic activity between 2007-2009

Housing bubble: term for an economic cycle that is characterised by a rapid expansion in the housing market followed by a rapid contraction.

Recession: refers to the general slowdown in economic activity over a long period of time. Many economists believe that a true economic recession can be confirmed if GDP growth is negative for a period of two or more consecutive quarters

Gross Domestic Product (GDP): the market value of all goods and services within the borders of a country for a year.

Barriers to trade: refers to any government policy or regulation that restricts international trade such as tariffs, quotas and subsidies.

Washington Consensus: refers to a supposedly common set of ‘pro-market’ policy reforms prescribed by Washington-based financial institutions since the 1980s.

Development state: term often used to refer to the phenomenon of state-led macroeconomic planning in East Asia in the late 20th century, but which has also been applied in other contexts.

Social cohesion: refers to the bonds that bring people together especially in the context of cultural diversity.

Remittances: is a transfer of money of a foreign worker to their country of origin.

Liquidity: the degree to which an asset can be easily converted to cash

Solvency: in finance, this term refers to the ability of an entity to pay its debts as well as the ability of a corporation to meet its long-term fixed expenses and accomplish long-tem expansion and growth

Liquidity constrained: is an arbitrary amount an individual can borrow or arbitrary alteration in the interest rate they pay. It is a form of imperfection in the capital market.

Macroeconomic: is a branch of economics dealing with performance, structure and behaviour of a national or regional economy as a whole.

Microeconomic: is a branch of economics that studies how firms and households make decisions to allocate limited resources.

ActionAid (2009), Where does it hurt? The Impact of the financial crisis on developing countries – www.actionaid.org.uk/doc_lib/where_does_it_hurt_final.pdf

Hossain, N., (2009), Crime and social cohesion in the time of crisis: Early evidence of wider impacts of food, fuel and financial shocks – www.devstud.org.uk/aqadmin/media/uploads/4ab77bf08a049_2-hossain-dsa09.pdf

DFID (2009), The financial crisis – a human crisis too – www.dfid.gov.uk/Media-Room/News-Stories/2009/The-financial-crisis—a-human-crisis-too/

UN (2009), The Commission of Experts of the President of the UN General Assembly on Reforms of the International Monetary and Financial System – www.un.org/ga/president/63/commission/financial_commission.shtml

Bretton Woods Project, a watchdog to scrutinise and influence the World Bank and IMF
www.brettonwoodsproject.org/index.shtml