You are here: Home » Resources » Oral Testimonies » Jean-Claude: we are not livestock

Jean-Claude: we are not livestock 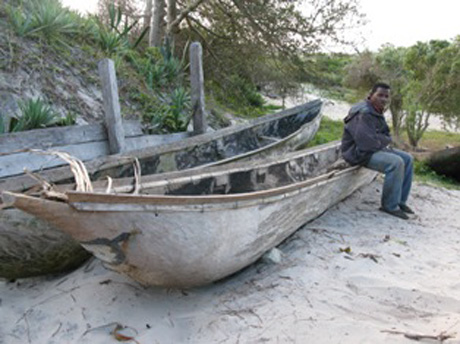 Jean-Claude from Ambinanibe, Madagascar - “We inherited land from our ancestors... [But] I don't think my children and grandchildren will enjoy it.”

Jean-Claude, 39, is clear that by accepting cash for land his community has lost “sustainability” and become vulnerable and dependent on others: “You could get fired any time.” Although he built a new house with his compensation money, he does not see this as an enduring asset in the way that farmland was. He describes the negotiation and compensation processes and it is clear that for him, trust has broken down.

He believes the government bears responsibility for their precarious economic situation as well as the mining company. However, he gives credit to the improved transport services, which have “helped us enormously”. Even though he and his wife can’t afford the fare for themselves, they can pay to have heavy bags of cassava transported to market, while they follow on foot.

Ultimately, though, he resents the restrictions that have been imposed: “We are not like livestock to be restricted to a stable; we are human beings who have a right to live normally.”

Before, I could say that my life was good. Agriculture and fishing were my occupations… I used to farm my land three times a year and harvested lots of crops; however, this is not possible any more because the government took our land. Thus, people are deprived of their land to farm, resulting in food insecurity… In addition…Somatraha, an important source of fish for us villagers, was prohibited for fishing…

Even though I received money in return for my land, I thought it was not enough. The money was spent building a house and buying some items that I needed for my daily life. Worse still, the money did not last [any time]… Even if we got work for foreign companies, this would not be a sustainable activity that would help us forever. You could get fired any time, if your manager wanted.

“I lost the real value of my land”

The way my land was measured was not fair, because they only estimated my land surface instead of actually measuring it… The estimation was based on counting the number of steps along its width and length. Why didn’t they use a proper ruler? For me, I want transparency… I lost the real value of my land…

I complained on five different occasions. But so far there has been no answer. First, they…promised that they would give money in an amount that was appropriate to the return on my land; but many people were not satisfied with the money they received. In addition, some of my land was not registered under my name when they made their estimate. I was disappointed by this. Instead they showed me on television; they filmed me on my farmland. Now, I think that that film was just used as publicity for them, instead of benefiting me.

We inherited land from our ancestors… So this land should belong to our next generation but given the current situation, I don’t think my children and grandchildren will enjoy it.

[In the past] in addition to my sweet potatoes, I harvested my corn crop. These crops could last six to seven months. I harvested corn three times a year. I am totally convinced that the money I received in return for my farmland was too little. I think they took advantage of my illiteracy…

I am not trying to block QMM’s (QIT Madagascar Minerals – subsidiary of Rio Tinto mining for ilmenite) projects but the food security of my children is the most important thing to me. I am ready to go to [the law] to protect my land… but I am a bit afraid to execute my plan due to a lack of knowledge. I accepted the exchange [of money for land] because I didn’t know exactly what was going on.

Somatraha is a big loss to us… Somatraha had a lot of resources. We used to catch 20 sharks with our fishing nets. Even people who just visited Somatraha for a short time could get about 1 kilo of lobster. As for us, we caught 3 to 4 kilos per day. I think that these resources should have been inherited by our children and our next generation…

Before the foreigners (QMM) came here, Somatraha was our main source of income. During the winter, from May to August, we fished in Somatraha for three to four months, then we switched back to fishing in Bevava… This switching was based on the wind direction, which affected sea conditions. Somatraha and Bevava were like rice and corn and cassava. If we eat cassava today then we eat corn the next day, and rice the day after…

We had about a 30 metre-wide shore. But since QMM took over these places [to construct the port], there is hardly anywhere to moor our boats – because the seas have risen due to QMM’s work. Our boats moored in Bevava suffered from the impact of waves, showing cracks that jeopardise their future performance. There used to be about 400 boats in Bevava, but now there are only 20…

Our efforts are unproductive – even if we buy new boats – because the winds that blow from the south and the east are really strong, which makes the waves even stronger and further breaks up our boats… The shore has become flooded due to a rise in sea level, which makes leaving boats there impossible. As a result, people must lift their boats from the shore up to higher ground.

“Our government underestimates us”

Somatraha is not only our traditional fishing area but also our farmland. According to a meeting at the mayor’s office in Fort Dauphin, which was broadcast on TV, they said they would build a smaller harbour for us fishermen to use in Somatraha, when they started restricting access to Somatraha. Now, this is not the case – because we are not allowed any access at all.

I had a hard time believing that they would build this harbour for us, because they had already restricted us from collecting firewood in Somatraha… Besides, they expanded their appropriation of land towards our remaining farmland, getting closer to our ancestors’ tombs…

Currently, they are proceeding with the laying of the boundary markers. I asked [them about these] when I saw them measuring the land around here. Their response was that they were measuring the road, not the land. But in fact they marked the boundary [of the land]. I think our government underestimates us villagers.

“We are not livestock”

I will be struggling if I don’t have access to Somatraha. That is my source of income. In our village no one went to school. Even if there are people with education, they may not be able to find jobs. Nowadays, even people who have a degree cannot find jobs, let alone those who are illiterate… We are not like livestock to be restricted to a stable; we are human beings who have a right to live normally… We’ll lose our resources if the government restricts Bevava too. Where to go?

You never know what the government and the foreigners are planning… At the beginning they started building a road; afterwards they built another road that led to Somatraha. We thought they came here for some agricultural activities, but we were wrong. Once we signed the letter, our farmland became their property.

“Most of the money was used to pay back our debts”
The first thing I did was to build a house because I knew that the compensation money would not last long… So at least I have a house for my family. I also built another house, 6 metres long, from the money I received…

I can see a tangible benefit from my money… But I also had to pay back my loans with a high interest rate. So that is why I only built a house 6 metres long. My income from fishing was about 10,000 to 30,000 ariary every time I fished in the sea. So if I compare this income with the money I received in return for giving up my land, I think I lost out in a big way… Most of the money was used to pay back our debts…

My income decreased enormously [with the loss of fishing grounds]. Therefore, I had to take out loans to avoid famine for my family. I had no choice… Now that these fishing activities are restricted and we don’t have land to farm, we are exposed to loan sharks.

I would have liked to see [my children] receive some education. I am illiterate so I don’t want to see them in the same situation as I am…but if I want my children to study, I must send them to Fort Dauphin. This is impossible for me because I don’t have money to send them to study there. If the government want to help us, they could build a school in our village…

I would very much like the government to take action to help us… We, the local community, have already given up on the empty promises of each election time. Candidates promised to rehabilitate our roads… What they did was that they started the road and then for some reason they could not finish it. Instead they filled the open hole with sand, making conditions worse…

We were given a promise that they would bring electricity to our area, along with street lights, but so far it is an empty promise. This is one among the promises given by candidates [standing] for election.

“The bus service enlightens our lives”

I am really happy [about the bus service]. If I have heavy bags to carry and I have money, I can take the bus. For example, today my wife sent her bags full of cassava by bus. She walked because she did not have enough money to ride herself. But this helped us enormously because instead of walking with heavy loads, we could send her bags by bus.

We always take the bus whenever we have enough money. I think the existence of the bus service enlightens our lives in Ambinanibe because I feel like we lived in a dark zone surrounding a lamppost. There are remote villages such as Sarisambo and Analapatsy that have hospitals available to their residents; so I think it is time for Ambinanibe to have this bus service – to show that we too are trying to improve our lives.

Jean-Claude: we are not livestock is produced as part of the Pushed to the edge oral testimony project.

Jean-Claude: we are not livestock

Background to the region

The project and partners

Rivers and the sea