You are here: Home » Resources » Oral Testimonies » Jorgina: the value of cooperatives 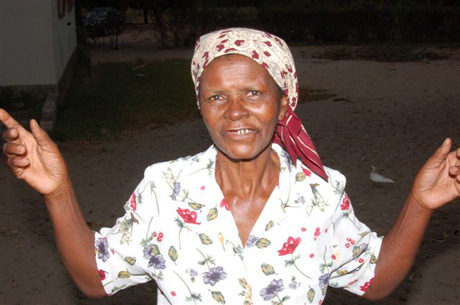 Jorgina, from Mozambique, was interviewed as part of the oral testimony project 'Living with poverty'

Jorgina vividly remembers Mozambique’s civil war. When her husband died, leaving her “in absolute poverty” to care for their 10 children, she “had to risk my own life going… to cultivate the fields, and escaping from armed bandits”. It was then that she joined the cooperative, which 30 years later still enables her to “alleviate my poverty” and has provided her with livestock, which “work the field for my survival…”

Although she received very little education as a child, Jorgina has always wanted to study and is enrolled on a literacy project run by her organização de camponeses. She is disappointed that young people are reluctant to join. “We fought [the war] so that they could be involved in the organizações,” she says.

She is more optimistic about women’s progress, saying that they are valued nowadays and that “men listen to women when they talk about the issues of the family, their lives, or even of the communities”.

Since I was born up until now I have wanted to study. I did not attend school because my father would not allow… us, as daughters, to go to school. As we know, the people of that time did not want their daughters to study, alleging that when they went to school they learnt bad ways… but there was a Roman Catholic school, which insisted ‘yes’ even if the parents said ‘no’… so they ended up paying so that I could go to their Catholic school.

I did not stay at the Catholic school for long because [by then] I was an adult, therefore I only studied until primary Grade 2. So I was withdrawn for what was called patrulha (‘patrol’; small groups that patrolled communities during the years of civil unrest to protect them against crime)…

I met a man I got on well with and he went to my home… [and] brought a proposal of marriage. It was difficult because of my father’s meanness. He was saying that in his house he did not want marriage [for his daughter]… But I ended up [being able to] marry the man due to the intervention of the church…

“I started to know what poverty is”

We lived a good life, but not for long. He died when we had 10 children: four girls and six boys… So, during the war my husband died, but not because of the war. He died of a disease. He died in Maputo in total poverty. We did not have a house and we had nothing at the place where we were staying, we were living on the generosity of others.

When he died I suffered, together with the children. The children wanted to go to school and I was supposed to support their studies. The oldest son left school and went to South Africa… He did not remember what it was that took him to South Africa and that his mother was suffering for the sake of their welfare. He decided to stay in South Africa without sending news, right up until today.

“I had to risk my own life”

The war in the rural areas was intense and I was staying in Maputo. It was very difficult for me to get food for the children. I had to risk my own life going to the rural areas to cultivate the fields, and escaping from armed bandits. Then I joined a cooperative, where I have stayed up till now because I thought I would alleviate my poverty, cultivating [crops], helping each other as brothers and sisters, cultivating food in the hope that one day I could be out of poverty….

Those days in Maputo city my life was very hard… I was getting food as part of a donation given by my own brothers. Once my brothers were staying in Maputo they organised a place for me to stay with my family… But I didn’t just wait for their help. I had to go to Marracuene to work in a small field where I used to produce cauliflower and lettuce, and carried it back in small quantities to sell in Maputo.

Sometimes my children were selling them while I myself was escaping armed bandits in the field in Marracuene. The little that I got from the field – sometimes sweet potatoes – I would bring in small bags to be sold in Maputo so that I could feed my children…

My children grew up [in Maputo] until the end of the war. I then returned to the rural areas and my children continued studying in Maputo, where they started working…

Two out of the four girls had to return to my house because marriage was not good for them, so they returned to me and they have their children with them. The boys, all of them, are working. The youngest of them is still with me at home…

The daughters who are still at home and have children – this makes me live in poverty again because the children of my daughters are supported by me, I give them clothes and enable them to go to school… Today a man does not stay with a woman. He can marry today, and tomorrow is divorced, while the woman is pregnant. So those who care for them are the grandparents…

But I can say that as for poverty, from the time I started working in the cooperative until now, I am able to face it with the little I get from the cooperative because UNAC (União Nacional de Camponeses; national small farmers’ movement) has given oxen to the organizaçoes [de camponeses] and cooperatives.

When a person receives bulls and cows and they reproduce he must give the young ox to another person in the cooperative. This person must also give their young animals to another member of the cooperative… When I received my cows they produced offspring and I had to give these to someone else: three of them, two cows and one bull – although I was unlucky as one bull and two cows died, but they help so much to cultivate my field. The cattle work the field for my survival…

Illiteracy: “a person can deceive you”

Because of being a camponês I am deceived when reading kilos, even if a vendor comes with his scales and says “Look, grandmother”, but if you can’t read the number a person can cheat you. But if you recognise a number you are able to look at the weight yourself… We are still looking for teachers to help us in our work or in the community, so that we can benefit.

In the past, we would go to church for the marriage service. There was no such thing as the wedding happening in a church and then the papers being signed at the registry office. People married and signed the papers at the church. In those days we were engaged without spending large amounts…

But today I see a big problem that I think makes our daughters abandon their husbands’ houses, because in those days if a woman could not stay with the husband, it was the responsibility of her family to give back the money, the lobolo (bride price), to the husband’s family. But currently, even if the engagement costs 10 million meticais, the next day the wife returns to her family and the money spent on the engagement is not given back…

In the past sometimes the man could choose the woman he wanted to marry and his parents would go to speak to the girl’s family. She was required by the parents to accept that man, even if she did not want to.

A woman swore to stay with her husband even if she was beaten by him or there was no food or house [provided]. She could not return to the parents’ home, because she was asking herself who was going to pay back the money to her husband’s family…

Health: “What distresses us are the deaths”

There is an organisation called SWAA (Society for Women and AIDS in Africa/Mozambique) that asked interested people to learn ways of caring for those suffering from certain diseases. These people are now teaching [others] how someone can contract and avoid [HIV and AIDS]. This organisation is the one that is helping people in need. Sometimes it provides sick people with food and transport to the hospital for medical treatment…

What distresses us are the deaths – but those related to other diseases, not HIV and AIDS… Every week there are reports of deaths in this area: two or three people die a week. This is one of the problems that mean we have no peace of mind because we do not know the causes of these deaths and how we can stop them.

Everyone has the opportunity to study. I think things are going well for both girls and boys. Although all have the opportunity, I would say that in certain cases girls are more serious than boys. It is not like in the past when girls were required to give up their education. Girls are determined, and they study seriously.

The government gives everybody the right to study, including women. The law says women must not be left till last. Now I see women in power. Even here in the associations women are the ones who are in the front. The Organização da Mulher Moçambicana (Mozambican Women’s Organisation) is also out in front resolving the problems of the country. There are also women who are leading the fight against HIV and AIDS. That demonstrates that currently women are valued; they are put in power.

It is not like in the past when women were required to listen to the man only. Today men listen to women when they talk about the issues of the family, their lives, or even of the communities.

Jorgina: the value of cooperatives is produced as part of the Living with poverty: Mozambique oral testimony project.