You are here: Home » Resources » Oral Testimonies » Mirriam: dedicated to others 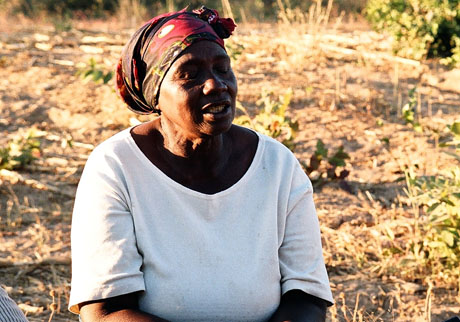 Mirriam is in her late 60s – she has been widowed twice and now looks after five grandchildren who have been rejected by their parents. Struggling with degraded land, poor rainfall, loss of livestock and lacking the energy of her youth, she and the children survive mostly on “wild vegetables and roots”.

Mirriam is also taking care of a son with AIDS. She has no doubt that the disease has had a huge impact on the community’s productivity, robbing it of its active young people, and placing a massive burden of care on the older generation.

She feels much of their suffering could have been avoided if the government had helped provide basic facilities, such as roads and water supplies, and income-generating projects. After all, she says,”we may be old but we are not lazy.”

My name is Mirriam and I was born in March 1939, here in Haamusunse village. I got married in 1955 when I was 15 years old to Chief Nyawa and had my first born that same year. We got divorced 10 years later; I had five children with him. I came back to my father’s house where I got married a second time. I was with my second husband up to 1997 when he died; I had another five children with him.

After my husband died, life for me and my children became unbearable. I was…living in abject poverty. My small business of selling vegetables could no longer sustain us in my late husband’s village, so I decided to come back to my home village and I’ve been here since.

Life is hard now that I am aging; I don’t have the energy that I had when I was younger so food is hard to come by. In the past we used animals to help plough the maize field, but now that the animals have died one needs to use manual labour – but there is no money or food to exchange with the people who could help in the fields.

These problems combined with this drought mean we are surviving on wild fruits and sometimes oranges and chibwantu (sweet beer made from crushed maize or samp, and roots of a common tree). To top it all I am looking after my five grandchildren. The worst part is when I fail to find them something to eat.

The [parents of my grandchildren] are around, living in the city…the people they are married to are not the biological parents of these children, so they didn’t want them. Their parents chose marriage over their children, so it’s my responsibility to look after them.

I have to do everything myself. They go to the community school nearby. It’s a struggle, but I manage – because if I don’t send them to school, who will? [The health centre] it is very far away, you really have to be very sick to go there… If I or any of my grandchildren do not feel well, I just use herbs because they are in the backyard, [not a long] distance away.

HIV and AIDS has destroyed productivity

HIV and AIDS among the young is what has led to the increase in the number of orphans -because our young people are not scared of the disease, saying that it is just a disease like any other, not knowing that they are killing themselves and shortening their life span and leaving us with the burden of looking after them while they are sick, and after their children once they die.

That is why this village is not productive, because all the young people, those in their productive years, have died – leaving the old people and their children behind. A lot of people here die because of this disease and…we are fully aware of how it is transmitted and the signs to look out for when someone is sick…

Health care providers used to come round and teach us about preventative measures; that is how people here come to know about HIV and AIDS.

Being a carer: “I had to put my life on hold”

My son has had AIDS for over a year… He was bedridden for a long time, but now he’s so much better that he goes to get his own medicine from the health centre. It’s not easy taking care of a sick person because I am the only one here. I had to put my life on hold for him, which meant that I couldn’t do any other business apart from taking care of him.

We were struggling together. He ate whatever I ate because he knew that…I didn’t have money to buy him fancy foodstuff, but the community also helps me by providing us with vegetables sometimes. And once there was an NGO that brought him soya beans and soya pieces and promised to come back once a week – but they never did. Anyway I am grateful for that one time they came and brought him food…

Apart from that one time, I have never seen anyone come here to help us with food or anything else. We just rely on God for all our needs…

There is no discrimination. People here rely on each other and on God. If you have a problem you discuss it with your neighbour and they help in whatever way possible. When my son came [from the city]…people were concerned for him and wanted him to get better, which thankfully he did.

We are not farmers any more because we have no seeds and the land is barren now because there is no rain. We don’t keep animals because they have all died from disease. Certain people are traders, but at the moment the only person who has a shop is the vice head of the village, although lately he’s gone downhill because he has no money to buy stock.

Life now is really hard, unlike the olden days when I was young and full of energy. Our maize fields were green, it always used to rain at the right time and we also used to stock up grain for rainy days, but now there’s absolutely nothing. We survive hand to mouth all the time.

We used to make money when we sold our produce so…there was no poverty or any food shortages in the past but now the world has gone down the drain. People in this village are suffering and when I say suffering I mean exactly that!

We used to cultivate about 100 bags of maize, but now we can’t even manage one… No [chemicals then], we were just using manure, and anyway the soil was so rich and fertile it never let us down and we were grateful – unlike now, it is just sand, sand and more sand…

“A person without cattle is poor”

The land is just wasting away because then we owned a lot of cattle which helped us in the fields, but when my father died his family took away all his property and left us with nothing. Luckily now there’s no property grabbing like that.

A person without cattle is a poor person. A rich person [is one] with a lot of cattle, chicken, pigs and goats, with a lot of children in the city who send him money at least once a month. If there is a person like that [here], he probably just has maybe one cow or one goat and two chickens if he is lucky. Otherwise we are all in the same boat, struggling to put food on the table.

I mentioned that we had no rainfall this past season. This has also caused a lot of problems because now we have to also walk long distances in search of water and when we do get water it’s never clean…we get it all from the dam and we share the water with livestock – people take their animals to the dam to drink.

The other thing is that the dam has started drying up due to the weed spreading over it… that dam is our only source of water. So right now we are experiencing water shortages on top of not having enough food.

‘We may be old but we are not lazy’

[We survive on] wild vegetables and roots but apart from that there is no food. It’s even worse for the younger children because they don’t understand why they can’t be given food when they are hungry… It’s really sad.

The government really should come up with income-generating projects because we are not lazy people. We may be old but we are not lazy. In this village – despite the dam being far away and drying up now because of the weed – people still have large gardens where they grow different kinds of vegetables like tomatoes, cabbages and rape, and they continue to go to the dam just to draw water for the garden.

It’s not easy but people manage. I would have had a garden as well, but my circumstances do not allow me at the moment.

We need water here in the village. We need a proper road network, a health centre near the village and we need a school. A lot of what we are going through could have been avoided. Like I have said this place needs development, not AIDS – because it is wiping our young people out.

Mirriam: dedicated to others is produced as part of the Living with poverty: Zambia oral testimony project.