You are here: Home » Resources » Oral Testimonies » Naema: nothing the same 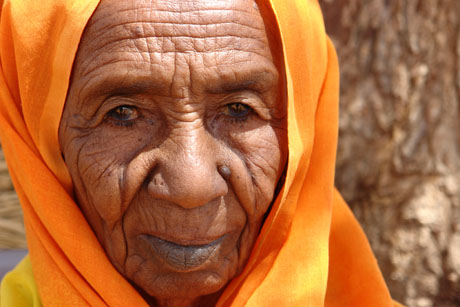 Naema: 'The sands will bury them, just as they have buried my house'

Naema is 88, and fondly remembers when land and livestock were productive and “no one travelled abroad” for work. “Life was very good,” she says. The 1984 drought changed things in her village which, despite receiving aid from a Kuwaiti organisation, could not protect itself from the encroaching sands.

Today, few crops can be cultivated and productivity is low. “The sands will bury them,” she says, “just as they have buried my house”. Lack of pasture means the few remaining livestock depends on feed bought at the market. People left in the village rely on income sent by sons and husbands who migrate for work. Their health has suffered, and malaria has become common.

Naema describes a dispute with a nearby village over the ‘ownership’ of the local school, which was built with Swedish aid. Although it was resolved, few families can afford the fees and young people are leaving to start work and save money to get married. She describes the weddings of the past as joyous occasions,”but Glory be to Allah, nothing remains the same…”

Naema [is my name]. I am 88 years old… When we grew up it was the British colonial time. There was no desertification… Life was very good. We raised our children and married them all. We had goats, camels and sheep… We collected gum arabic from the hashab (Acacia senegal) trees. No one travelled abroad, and only one or two people joined the military.

‘Not a cow or goat was left’

We suffered a lot until we received the relief from the Kuwaiti Organisation (aid agency). Some people moved to Omdurman, El Obeid and Bara – where they lived in the Kuwaiti camp. Then people travelled to Libya [for work] and sent money home… After that they went to Saudi Arabia…

[In all] some 35 families have left their homes to live in Bara and El Obeid due to desertification, and those who stay depend on their sons who travel for work and send back money.

Attempts to protect the village fail

Today there is no gum arabic and there are no trees. We cultivate sesame without any yield… Millet, maraig (white sorghum), cowpea, watermelon, karkaday (Hibiscus sabdariffa) and sesame [were cultivated in the past]…

Nowadays, we cultivate seeds recommended by the Ministry of Agriculture, which are sesame, cowpea and watermelon…but the sands will bury them, just as they have buried my house… We have no grass or trees [for building]. We rely on mesquite (Prosopis chilensis) because we have nothing else. It has become a hallmark of the village.

We planted trees and made a shelterbelt [to protect the village]. When the trees grew, they were affected by pests (termites and some larvae) – they destroyed them all… Sands buried the agriculture and ruined the trees and houses – even the dura (sorghum), which is resistant to the winds, did not withstand burial. Some pests appeared and destroyed the dura completely. This is also happened when we cultivated cowpea.

There is no reliable pasture for the animals of the village… Most of our livestock died because of desertification; what is left is being fed by its owners, from the market. [We shop] in Bara, and men sometimes go to Mega market. In the past we didn’t go to the market often [as] every two houses would slaughter an animal and share it.

During the Swedish [anti-desertification] project we cultivated vegetables, but the hand pumps have broken down, and the well has been buried by sand.

There is no milk. People used to rely on milk, for it strengthens the body. But now there is nothing that can feed people… There is lots of malnutrition… and diarrhea among children, and malaria… Pregnant women also need good nutrition, and they suffer from complications caused by hunger…

Though I’m fit and work in agriculture, am a midwife and do the household chores, I contracted malaria this year. My sight is still good though, for I can see from here to the tower of Sudatel in Bara, about 9 kms away…

‘There are few who attend school’

Education is available, but there are few who attend school. Most leave school to get married or [because of] the school fees – which are 3000 Sudanese Pounds monthly. Most families don’t have that money… When girls leave they work with their mothers, making mats. The boys work as shepherds. I have two sons, both of them are shepherds – in Bara and Um Laham. Their father was unable to [pay for them to] complete their schooling.

The Sheikh (community leader) along with the help of the village committee, manages to solve and settle simple problems, but not the bigger ones. I myself don’t recognise our Sheikh. There is a school in our village that another village took and named as theirs. I went to Khartoum to prove that school belongs to Foja village, and at that time the Sheikh did nothing.

This school was given to us by the Swedish project. At the beginning, they asked all the surrounding villages if they wanted the school, but they refused. When they came to us, we accepted. The director of the project came and we went to the local Commissioner and waived our land for the sake of that school. After two days, they started the work…

The Ministry of Education visited us and we brought a man to teach the class. He worked at it but some problems appeared. We discovered from a medical form of one of the students…that the teacher had registered the school in the name of Shagel-Noum village because that was where he was from… We held a meeting with the council of parents and the education authorities, and we proved that the school belongs to us, for it is on our land…

Men who travel outside of the village provide for the needs of their children… There are some men who travel leaving their wives pregnant and alone with their children. She is then the breadwinner for her children and herself. If her husband finds a job, he will send her some money. Our young people are good… They work as masons, collect the money and send it to their parents; and also use it to marry.

Weddings were good in the past. Ten feddans (approx. one acre) would yield about 60 to 70 sacks [each containing about 90 kg of grain], and this quantity was enough for a marriage. If it wasn’t enough, it would be topped up with the sale of some livestock. During the celebrations we used to slaughter an ox for the mother-in-law and another for the bridegroom – we didn’t slaughter goats or sheep. We also used to cook with ghee (clarified butter) instead of oil. But Glory be to Allah, nothing remains the same…

Naema: nothing the same is produced as part of the Desert voices: Sudan oral testimony project.