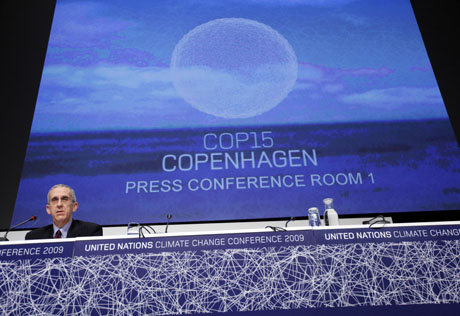 An American delegate talks in the press conference room at the UNFCCC's Copenhagen conference. A number of African states didn't sign the Copenhagen Accord at the meeting / Fredrik Naumann - Panos Pictures

Insights from a climate change veteran

I have been reporting on climate change for more than 20 years, and I have lost count of the number of times I would be walking through some BBC newsroom or other when a colleague would call out: "Hello, Alex. It's a very quiet news day today. We might have room for some of your climate rubbish" – except that they did not use the word rubbish, but something more robust.

That story is familiar to some of you – and I am repeating it partly to remind you of how reporting on climate change does require us all to remember all of the time that we do have to repeat ourselves a lot. After a time much of the story becomes familiar to us, perhaps boringly familiar. But it will not necessarily be familiar to our audience. So repetition is often necessary.

I am daunted to find myself described tonight as a veteran, and I am daunted too that anyone should think I have any insights to offer. Despite that, I have tried to marshal my thoughts along those lines. So here goes…

Don't know too much about climate change. When I was being interviewed for the job of BBC environment correspondent someone asked me a question which I was completely unable to answer. So I said: "I know so little about the environment that you ought to appoint me as your correspondent, because I will not be able to confuse the listeners." It was true then – and it's true now. I have a very short memory span, and every time I have to write something about climate change I have to look up the latest statements from the UNFCCC (United Nations Framework Convention on Climate Change) or the IPCC (Intergovernmental Panel on Climate Change) or whoever it is.

In the same way, you don't need a science degree – in fact you are probably better off without one. Not long ago I met an Australian journalist who summed up the understanding of science in her newsroom. "If it's green and wriggles, it's biology," she said. "If it stinks, it's chemistry. And if it doesn't work, it's physics. That's all the science we know."

You certainly won't be able to confuse your audience if that's all the science you know. But obviously you have to keep up with the science, and the diplomacy, and the economics and the technology, and all the other aspects of climate change. That way you will be able to hold your own in an interview with an expert.

And when you are talking to an expert, especially to a scientist, get them to tell you exactly what they mean in a language that you can understand. That way there will be a good chance that your audience will understand it too. And many scientists will be grateful to you for helping them to explain themselves clearly.

However little you know about climate change, you can be pretty sure that after a week in the job you will know more than the news desk knows. So make quite sure the desk does not talk you into neglecting an important story, or writing one that should not be used.

This morning, I saw that there was a slight snow shower – I think I counted five separate snowflakes. That would have been enough to prompt a BBC editor to say: "Oh, it's snowing. That proves climate change is rubbish. Write me a story saying it's all ********, will you?"

Keep hold of a sense of time. Twenty years ago, if you asked a climate scientist whether humans were causing climate change they'd say probably – but ask them again in ten years. So you'd go back to them in the mid-to-late 1990s and ask them again, and they'd say yes, and it was probably serious. Last year, in its Fourth Assessment Report, the IPCC said humans are causing climate change, it is serious, and some of the changes could be "abrupt and irreversible". Now some scientists are saying it's more serious even than that – they suggest the Greenland ice cap may start to melt at or close to 1.5 degrees Celsius above pre-industrial temperatures. We have already warmed by at least 0.6C since then, and because of the long time the atmosphere and the oceans take to respond to past greenhouse gas emissions we are committed to a total temperature rise of 1.1-1.3C even if all emissions across the world stopped tonight. Things are moving fast.

Remember that less is more. You cannot tell your audience everything, and you should not try to. Broadcasters try to get across just one point in a story – any more, and the audience is lost. So tell them the essentials and make them want to find out the rest for themselves. Never overestimate your audience's knowledge, and never underestimate their intelligence. They may not know much, but you can be sure they're bright.

The good climate change reporter is the good reporter full stop. If you are a good reporter, you will cover the climate well. You will be:

There was a Stone Age tribe which required every man to go out each day and hunt for food. It was a dangerous job and only one man was excused from the hunt. He was the tribe's storyteller. He was so important to them that they agreed he could stay at home while they went hunting. But there was a condition attached to the job. The head of the tribe gave him a warning: "Your stories are immensely important to us. We value them, because they are so interesting. But if you ever tell us a story which is not interesting and which sends us to sleep, you will have failed. And then, unfortunately, we shall have to kill you." Being a boring journalist is to court professional death.

You can change the world, by finding out what is happening and then turning it into interesting and compelling stories. You are the eyes and ears of society. That's why journalism is the best job in the world. And I wish you all the best of luck in it.