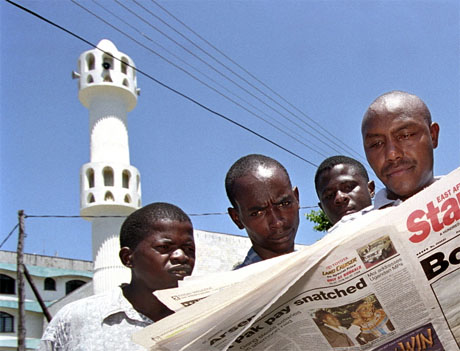 Mombassa, Kenya. Locals read The Standard to find out news about a bomb attack that happened the day before in the city / Sven Torfinn - Panos Pictures

In late 2009, three newspaper articles appeared in the Kenyan press, contributing to a newly emerging debate in the Kenyan media over government transparency and accountability.1 Media reporting in Kenya on governance issues, particularly in relation to corrupt practices in public spending, is not new. What was unusual about these articles was the attention they brought to the specific issue of taxation. Who is paying tax? Who is not paying tax? And what is happening to the revenue?

Using evidence from a range of sources, these articles showed the potential for more in-depth questioning and scrutiny of tax issues by the Kenyan media, strengthening the role the media is playing in the development of Kenyan democracy.

The three journalists who published the articles had all recently participated in a workshop for researchers, civil society organisations (CSOs) and Kenyan media representatives held in Kenya in November 2009. This workshop was part of a series of interventions delivered by Relay, a media and research communication programme. The Relay programme is managed by Panos London, which runs workshops and other activities with the other institutes within the Panos network, including Panos Eastern Africa. Relay provides training and facilitates relationship-building among key stakeholders to support more in-depth, research-informed media coverage of complex, under-reported or misreported development issues. The long-term goal is to generate public debate that can have an impact on policy and bring about much-needed change.

This case study describes some of the methods and activities developed by Relay and how they were applied in Kenya to the issue of tax and governance. It offers a detailed and descriptive account of Relay’s series of workshop sessions, in particular. In doing so, it attempts to shed some light on practical ways to:

The case study also looks at the results of these activities, and what might be achieved with further investment in and support for journalists and researchers in Kenya. The outcomes of this case study give some indication of what could be achieved in other country contexts, where media and political environments may differ.

Ultimately, the case study aims to inform the work of a broad group of actors, including researchers, communication specialists, media development practitioners, infomediaries, editors and media managers, as well as organisations interested in funding initiatives to improve research-informed development.

This case study describes some of the methods and activities developed by the RELAY programme, applied to Kenyan governance and tax.