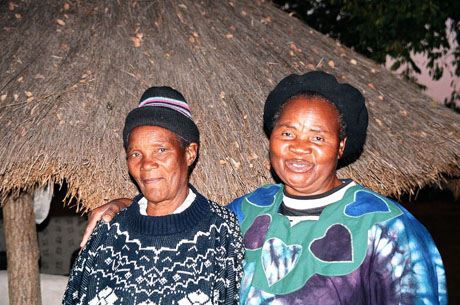 Sara is over 80 years old and has no family: she was an orphan from birth, has been widowed twice and lost both her children. She has almost no belongings and no resources of her own.

Although she has no relatives to look after her, people in her village help her in various ways – one young boy brings her medicine from the clinic and another family lets her stay in their compound.

She also gets her clothing and a little financial help from organisations that support widows and orphans.

I was born at Kasongo village… I never saw my mother; she died when I was one day old. I didn’t know my parents, my father died before I was born. My brother by relation – not my blood brother – brought me up: Mr Hachemba and his wife…

I was married at Kwamulongo Village. That is where I had the first child, who later passed away… when my first husband died, I came here to Hamusunse and got married to a man who died too and left me alone…

[I stay with people who] are just my friends. They are not my relatives… I am helped by so many people in the village since I don’t have children…

I only had one child [left], now he is dead… He was a teacher; I don’t know [what grade]… I only know that he was a teacher in Kalulushi… [His children] are in Kalulushi. They are with their mother – because she was not removed from the house when her husband died… she is able [to educate them and] because she is a teacher.

I live – even though I have no food, I have no blankets to cover myself. I am in trouble because I have no relative to assist me. From the time when my husband died, I have had nothing. Even the well – I am failing to get there because of the distance involved… [My house] is a kasengele (small hut). It is not a good house. And I am too old to build another.

We get health treatment at Pemba Clinic. But I am unable to get to Pemba, my legs are painful… There is one boy who stays in a nearby settlement who brings back medicine for us… Yes, people do help [us] because we are widows and orphans. They bring clothes and give them to us…

These days, it is impossible to expect help from relatives from different parents. My own step-brother went off when I was a young person. I am alone. That is why I am asking for help from different people and the government. They…even assist me with money.

Farming past and present

The present farming, you have to apply fertiliser. In old days, they used to plough without fertiliser. They did not buy any seeds. They used to ask for them from friends. They were planting groundnuts, maize, cassava, sweet potatoes etc. They were keeping cows, goats, pigs and sheep.

We used to grow groundnuts, sweet potatoes, yams, maize etc. And we used to plough with cattle and hand hoes. These days, if you don’t have cows, we have to use our hands, using hoes.

There is a big difference [in the way we live now.] These days people do not live together. Each one lives with his or her [immediate] family. And in the old days, we used to dress in animal skins and maaya (knotted tree fibers), carrying a baby on your back…

During our time, men did not cook. A man married so that a woman could cook for him. As for a man cooking, it was taboo. Marriage these days is different. Marriages of long ago were quite good, but these days it is difficult – because most of the time marriage is for quarreling.

In old days, a boy would start playing the kalumba (stringed bow) to let his parents know that he wants to marry. Parents will then start to look for a girl for their son…. Their parents would give the boy a girl, not the one he wanted.

We were storing our crops in matala (storage huts). Men and women were all working together… even though women were doing more jobs. Each family kept its own maize.

[At a certain age] they used to put the girls in the initiation house for two to three months [and] teach them how to keep themselves healthy and how to do house duties. They used to bathe [and] the girls applied mukuba (a type of oil) on their bodies.

[We did not experience drought then]; these days drought is here… We have no water for drinking. Only people with children are able to fetch water from the long distance where it is found. I am old and have no children to get water for me. I have a big problem.

[The government] try to help us by bringing boreholes… All the wells, the dams, from which we get water are dry because of poor rainfall. There is no medicine that we put in the water; we just drink it as it is. [Our animals drink] from the same dams we get our drinking water from.

Sara: coping without family is produced as part of the Living with poverty: Zambia oral testimony project.