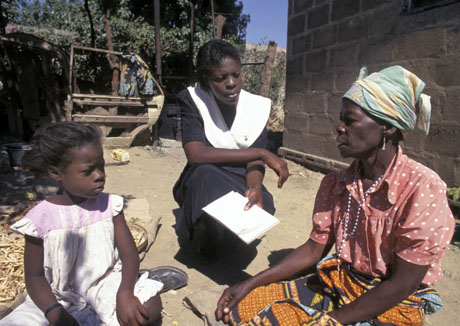 Nearly 10 years after the launch of an international effort to tackle the global health  emergency of tuberculosis, TB remains one of the world’s major causes of death. Millions of
people are undiagnosed because of fear, stigma, poverty and ailing health systems. The media’s role in dispelling fear and providing clear, factual information is vital.

Imagine a natural disaster hitting 14 million people around the world and killing almost 2 million. It would be headline news.

But when TB threatens the lives of the same number of people every year, it goes largely unreported. In 2006 Médecins Sans Frontières described TB as the world’s second-most underreported humanitarian story.

Yet for millions of people whose lives are devastated by TB, the problem is as urgent as a major disaster. TB exacerbates social injustice – it hits people and countries already suffering from poverty, overcrowding and inadequate nutrition, and makes them even poorer.

Although HIV has caused TB and multidrug-resistant TB to increase, the vast majority of TB is still treatable with simple, affordable drugs.

A major international effort to tackle TB has resulted in progress, but people still die needlessly.

The public need information based on evidence from research and they need questions asked of government on their behalf. Good research has been done which needs to be publicly discussed so that the right decisions are made about how to tackle TB. By drawing attention to research, making it accessible and raising questions that policymakers and the public engage with, journalists can lead the way in the fight against TB.

About one third of the world’s population is infected with TB, caused by Mycobacterium tuberculosis. Most people do not become ill. However, more than nine million people whose immune systems cannot fight off the disease develop active TB annually.

Active TB can affect any part of the body, but it usually attacks the lungs, and is referred to as pulmonary TB. Typical ways of passing on the disease are through sneezing, coughing or spitting.

HIV infection, which suppresses people’s immune systems, is a major risk factor for developing active TB. The HIV epidemic is thought to be responsible for multiplying TB in some African countries.

TB is often thought of as a highly infectious, deadly disease. However, effective, inexpensive treatment is widely available, including for people with HIV. Nearly 85 per cent of all diagnosed cases are successfully cured by six to eight months of treatment with four simple drugs that cost between US$10–12 per person.

Worryingly, TB that is resistant to common anti-TB drugs is increasing. Multidrug-resistant TB has been reported in more than 22 countries. Drug resistance can result from patients not completing their full course of treatment or from health workers’ mismanagement.

Second-line drugs for multidrug-resistant TB cost as much as US$12,000 per patient. Even more alarming is the development of extensively drug-resistant TB in places with high HIV prevalence.

However, it is important to recognise that the vast majority of TB is still treatable with simple drugs. The main problem is detection and access to treatment.

In many communities, people with TB hide their illness to avoid being isolated, judged and stigmatised. The stigma associated with TB can prevent patients seeking or completing treatment for fear of being exposed and ostracised.

In many countries, the link between TB and HIV leads to shame and accusations of immorality. TB’s infectiousness is wrongly linked with being unclean – another cause of stigma.

Poverty
Poverty is a key factor in making people vulnerable to TB. People in low-income countries are most at risk of developing TB, with 80 per cent of cases found in Africa and Asia.

However, poor people are less likely to seek treatment because of inadequate health education, distance from health facilities, and lack of time and money. Untreated TB then increases the rate of infection in poor communities.

Poor people’s living conditions mean they are more likely to be infected through overcrowding, poor ventilation, malnutrition and ill health. Within poor communities, displaced individuals and those living in remote or informal settlements are particularly vulnerable to TB because of overcrowding and difficulty in accessing health services.

TB also makes poor people poorer, through loss of income during sickness or the high cost of getting healthcare (for example, the need to pay for transport or childcare, even if the health service is free).

A review of studies by I Bates and colleagues (2004, Part 2) indicates that TB started to decline as extreme poverty decreased in richer countries, even before effective drug treatment was widespread. With better nutrition, less overcrowding and improved ventilation, TB stopped spreading so quickly. The review concludes that reducing poverty in developing countries is also likely to be crucial to tackling TB.

The HIV epidemic is a major contributor to the current rise in TB. Frothingham and colleagues (2005) showed that untreated HIV infection increases the risk of latent TB becoming active by a hundred times or more. HIV-positive people being treated with antiretrovirals still face five times the risk of developing TB compared with HIV-negative individuals (Gandhi and colleagues, 2006).

Co-infection with TB and HIV makes it harder to diagnose TB (Corbett and colleagues, 2006). HIV-positive people are more likely to develop TB in several parts of the body, which is harder to cure.

Smoke and pollution
Smoking and air pollution decrease the lungs’ defences and make people more vulnerable to eveloping TB. Smoking is one of the most common risk factors for developing active TB. A review by M N Bates and colleagues (2007) found that smoking causes a 40–60 per cent increase in an individual’s likelihood of developing active TB.

Burning wood, animal dung and other biomass fuels for indoor cooking or heating in India was found to be a significant risk factor for developing active TB in a study by Mishra and colleagues (1999).

Age and gender
Most people with TB are in the economically productive age group of 15–59 years. However, people over 60 with TB may be under-diagnosed owing to atypical symptoms. They also have a higher risk of death from TB.

Children under three with immature immune systems are at greater risk of developing active TB. However, they often have no sputum-producing cough and are harder to diagnose.

Reaching the most vulnerable

A number of initiatives are being proposed to improve diagnosis and treatment of those most at risk from TB.

Health systems across the world currently rely on patients with TB reporting their symptoms at health facilities (passive case-finding). However, I Bates and colleagues’ review of studies (2004, Part 2) says that passive case-finding is estimated to only detect about half of active TB cases. Some TB researchers are calling for active case-finding (looking for TB symptoms) among vulnerable groups (Golub and colleagues, 2005). The World Health Organization (WHO) recommends that health workers in HIV counselling and testing centres actively look for TB infection.

Other groups in which active case-finding has been effective are homeless people, prisoners, residents of nursing homes, the very poor and people in close contact with TB patients (Golub and colleagues, 2005). Corbett and colleagues (2006) called for screening all HIV-positive people for TB, and preventative TB treatment for individuals who have tested positive for HIV.

Enhanced case-finding through community education and outreach in vulnerable communities may also be important.

Even when people report with TB symptoms to health centres, a significant proportion are not correctly diagnosed. I Bates and colleagues’ review of research (2004, Part 2) shows that a number of problems at health facilities put people off seeking diagnosis or result in wrong diagnoses. These problems include: unhelpful staff, lack of confidentiality, broken equipment, dirty facilities, lack of trained staff, absenteeism, inconvenient opening hours and long waiting times. A number of initiatives are underway to improve health worker training and health facility functioning, though changes in government policy and legislative frameworks can influence the success rates of these programmes.

Another problem with diagnosis is that after a first visit to a health centre, many patients cannot return the next day to provide a standard follow-up sputum specimen.
Researchers are now testing ways of diagnosing on the first visit. A small study in rural Ethiopia (Cambanis and colleagues, 2006) showed that two specimens taken on the same day were just as effective as two-day specimens in diagnosing TB.

Much work is being done to develop new tests that can diagnose TB more quickly and accurately. However, many are too expensive or inappropriate for laboratories in developing countries. There is a pressing need for a simple test that can diagnose multidrug-resistant TB quickly in laboratories with few resources.

In many countries, the private sector plays a major role in healthcare. A report by the Indian NGO MAAS-CHRD (2006) found that 60 per cent of TB cases were managed by private practitioners. Many are not medically qualified or do not follow standard TB-control guidelines.

Where national TB programmes have made partnerships with private practitioners, there have been successes in controlling TB. This success shows that even in countries with limited health infrastructure, training community health workers can be effective.

The role of the media

The media can play a significant role in addressing TB by raising awareness of the problem – and what can be done to tackle it. There is a need for accurate research-based information to lead people to seek diagnosis and treatment, to dispel myths, fight stigma and raise questions about what is being done to protect people from the disease.

A profile of TB in your country (based on research)

Knowledge and stigma around TB

Several studies in South Asia (Ganapathy and colleagues, 2008; J A Khan and colleagues, 2006; Nair and colleagues, 1997) highlight concerns that TB can affect a woman’s marriage prospects, owing to fear about preading TB through sharing utensils and worries about the cost of the illness. Myths that it causes infertility or can be passed through breastmilk affect other communities.

A study in Malawi by Kemp and colleagues (2007) found that the cost of TB diagnosis was too high for poor people (248 per cent of monthly income) even when free health services were within six kilometres.

A trial of outreach services in rural Ethiopia by Shargie (2006) found that holding monthly diagnostic outreach clinics and educating people increased the speed of TB detection.

A study by M S Khan and colleagues (2007) of a large urban health facility in Pakistan showed that women were under-diagnosed because they did not understand the importance of producing a deep sputum sample, an action which may be culturally embarrassing in public places. Getting a health worker to provide brief guidance resulted in a large (63 per cent) increase in case-finding in women.

Success by working together

A study by Kelkar-Khambete and colleagues (2008) found that training private practitioners in India resulted in more referrals of TB cases to free government facilities. Ardian and colleagues (2007) document how a private company in Indonesia has funded a TB clinic staffed by NGO health workers who follow national TB guidelines and receive government training. In Afghanistan, involving community health workers in detection, referrals and home-based treatment resulted in a 380 per cent increase in detecting TB (Ahmadzai and colleagues, 2008).

Issues to explore in more depth

Access to International Journal of Tuberculosis and Lung Disease
www.ingentaconnect.com/content/1027-3719

The Special Programme for Research and Training in Tropical Diseases (TDR)

Part of EQUI-TB Knowledge Programme, promoting the implementation of pro-poor strategies that enhance care and support for TB among the poorest
email: qwjiang@shmu.edu.cn

Part of EQUI-TB Knowledge Programme, promoting the implementation of pro-poor strategies that enhance care and
support for TB among the poorest
email: bertha@equi-tb-malawi.org