You are here: Home » Blogs & features » Voices from the Ground » How a drug lord became a teacher

How a drug lord became a teacher 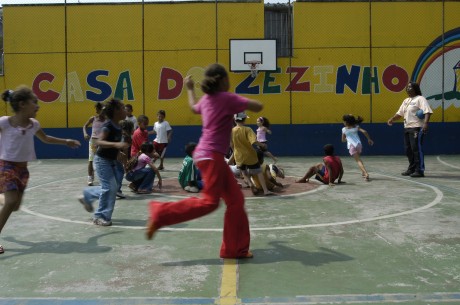 I’ll tell you the story of one of the first children I took in here at Casa do Zezinho in 1994. His name is Marcos Lopes, and he is known as Nene. When he was 10 he was very headstrong. He would not behave in school and was bad-tempered, his father was an alcoholic and often beat him and his brother when he was at home.

In school, like many others, he did not fit in. They didn’t speak his language. Take for example the books kids are made to read. They usually say ‘the dad and the mum went shopping in a supermarket and then put the food in their fridge’. What dad? What supermarket? What fridge? What food?

Anyway, Nene started really making trouble at the school. He ended up stealing some stuff from the canteen and was expelled. So he was referred to me by the teachers at his school. But by this stage he had given up on schools of any kind. He thought: “This is it. I don’t belong here, I should turn to crime”. And so he went, when he was just 12.

But Nene had always had a special gift that we kept reminding him of: he could write very well. And he was only 12! We would tell him to write more, but he would reply that being a writer is for rich kids, not for somebody from the favela.

He went far and became a drug lord with his own “business”. But he would always come to visit us at Casa do Zezinho, he was always very kind and loving to us. I never lost track of him either and would always say “Nene, why don’t you drop this, you write so well…”

Nene grew up in crime. Then one day when he was almost 18 there was a mass murder here in the neighbourhood as a result of a gang fight. He was talking about it with a very good girl friend when she asked him: “If I die one day, will you raise the money to bury me in a private cemetery?”

She didn’t want to be buried in the local public cemetery. It has a terrible reputation. Graves are not cared for, weeds grow everywhere. When it rains, people say skulls and bones roll down the field.

Of course Nene said yes. She was murdered the following day in another mass murder committed by a gang.

He asked me to help him pay for a private cemetery.

“Ok Nene,” I said, “I will do that, but who will come here to ask for money when you get shot?”

This phrase touched him. He was also seeing many of his colleagues in crime die, while friends from Casa do Zezinho were actually going to university.

So he came to ask me if he still had a chance. “Of course,” I said. I gave him a computer here in the building for him to write. “Just tell your life story,” I said. I also convinced him to enrol in school and then go to university.

He graduated and became a teacher. More than that, he ended up teaching at the school he was expelled from! The director recognised he was very good with kids, because he spoke their language – and that’s what a good educator should do.

As for the book, he finished writing it and finally published it last year. He now gets many invitations to give lectures about his experience. He has just been in Germany for a month sharing his life story. We hear it was a great success.