You are here: Home » Blogs & features » Voices from the Ground » Manipur widows stand up for their rights

Manipur widows stand up for their rights 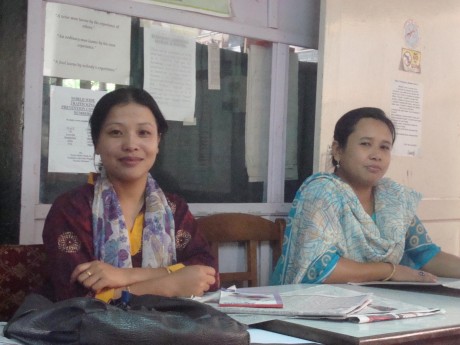 Cases like this have become commonplace in Manipur during the ongoing armed conflict situation.

On average one to two people are killed in shootings here every day. And we are never sure whether these killings are a result of cross-fire between the security forces and the “insurgents” or whether these encounters are faked by the police to target people they think are linked to the insurgents.

What is so worrying is that many of those who die in the conflict are people in their twenties, thirties or forties, so most of them leave behind young wives and young children.

A widow’s life, especially in a deeply traditional and patriarchal society like in Manipur, is full of hardships and struggles. When a woman becomes a widow at a young age, the problems intensify.

A woman is expected to die in her husband’s house, so even after he dies she is expected to live with her in-laws. Your in-laws think you will run away with another man, and the men think you are easy prey.

The new responsibility of becoming the sole bread-earner and carer for the children adds to a widow’s burdens. This is especially hard in a small state like Manipur, where, apart from the government sector, there are very few earning options.

When I was newly widowed, I used to wear the traditional mourning dress – the white upper cloth and the salmon-pink lower sarong-like phanek. I also dutifully drew the black chandan on my nose and forehead – the marks of a Hindu widow – thinking I would mourn my husband for the traditional one-year period. At that time, I was working as a cook for a family.

One day, as I cycled to work, a man in my own locality called after me jeeringly. We had known each other since childhood, but that day the way he shouted at me was filled with innuendo.

I was so angry that I rode back and threatened to kill him if he ever called my name like that again. That was the last day I wore the mourning dress and the black chandan, though the one-year mourning period was yet to be over. If that widow’s outfit was to make me more vulnerable, I was determined I would never make myself vulnerable again.

Seeing this young woman lying on the hospital bed, I was reminded of my own struggles as a widow and also of many other widows in Manipur. If these widows are not able to access a proper source of income, then their poverty and their love for their children often leads them into a life of deception, crime and the flesh trade. That is why almost every other week we read in the newspaper about widows arrested by police for acting as couriers for weapons or extortion letters.

In these same newspapers, we also get to read about how funds from many governmental schemes created for the benefit of widows are being misappropriated.

As a gender volunteer I meet many widows. One of my jobs is to tell them about the various schemes and help them apply for them. These include the Widow Benefit Scheme, through which a widow can get a one-time amount of Rs.10,000 (£140) from the social welfare department. The only catch is that the widow has to apply for this within a year of her husband’s death – and often women don’t realise this.

Another scheme is the newly introduced Indira Gandhi National Widow Pension Scheme under which widows between the ages of 40 to 64-years-old, and from families which are below the poverty line, can get financial assistance of Rs. 400 (£5.60) per month until she is 65 or until she remarries. This year, I helped three widows from my area of work get this pension.