You are here: Home » Blogs & features » Voices from the Ground » I helped 56 women weavers get health insurance 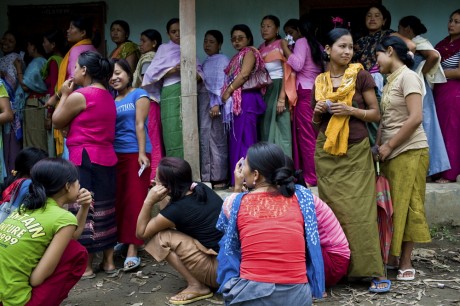 The women in my state spend most of their time caring for their husbands, children and old people in the house. As a result, they tend to ignore their own ailments, giving priority to others. So when they do ultimately go to the doctor, it is only when the illness has become very painful or when it is very advanced.

One of my roles as a gender volunteer is to ensure that women get regular access to medical care. Like my work trying to get pensions and benefits for widows, I tell women about certain government schemes that can help them. One example is a health insurance scheme for handloom weavers and ancillary workers, introduced by the government of India in 2006 through a public private partnership with ICICI Lombard insurance company.

Most women in my work area are handloom weavers. They make the traditional sarong-like cloth called phanek for women, the loin cloth, or khudei, for men, as well as the festive wraps called rani phi and wangkhei phi for ladies.

Those few who are able to buy a hand loom (which costs between Rs 3,000 and Rs 5,000 – between £42 and £70) do most of their weaving at home, installing the loom on their porch. Others who aren’t able to buy one work on the loom of a neighbour and give them a share of their earnings.

This healthcare scheme is a good opportunity as most of the women weavers live on virtually subsistence levels. Many of them also support their families with their weaving as their husbands either spend what they earn on alcohol or earn nothing at all.

However, even Rs 179 (£2.50) is a significant sum. Then last year I found out from a young man working for ICICI Lombard that there was a discount, for a short period, allowing the women to pay just Rs 50 (70 pence) as an annual premium.

As a result, I managed to get health cards for 56 women weavers in my work area. I went around telling each of them about the benefits of the scheme. To get the cards they have to belong to a society, so I arranged for a local weaver’s society to enroll these women as members.

Many of the women were illiterate or semi-literate; for many others it had been so long since they had needed to read or write that they no longer knew how to fill in the forms for the health card. So I sat down with them to fill the forms in.

Then I collected all the forms and gave them to this boy. He delivered the cards to me and I took them individually to the women, telling them that they must attend a health camp to be held within a few days.

I rounded up all the women and we went together to the health camp. The women also took some of their children along for a medical check-up.

Most of the women were found to be anaemic. Many of them complained of a frequent burning sensation in their stomach, back pain and tiredness, which I think were related to their constant stress and hard work.

One woman came up to me the other day. Her only son had a hernia. She was able to use the card to cover the cost of the surgery he needed. She was very happy. And her happiness made me happy too, and made my work more satisfying.

The year’s discount offer is due to come up again in a few weeks and this time I want to ensure that more women weavers are able to sign up.