You are here: Home » Blogs & features » Voices from the Ground » Women and children bear the brunt of conflict

Women and children bear the brunt of conflict 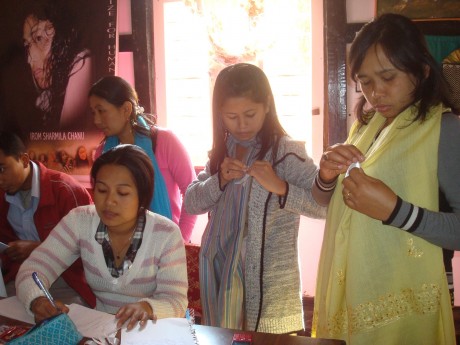 For the last seven years our organisation Women Action for Development (WAD) has observed the International Fortnight Protesting Violence Against Women. The run-up to this fortnight is very hectic for all of us – preparing documents, analysing our findings, consulting with key policy-makers and individuals, brainstorming novel ways to raise awareness about violence against women and then organising a series of programmes.

The theme this year focused on women caught in wars and conflict, which is particularly relevant in our state. For the last 50 years armed conflict has raged in Manipur between the state forces and various underground militant organisations demanding the state’s independence from India. Ordinary people are caught in the middle of the conflict. Every day in the newspapers we read reports of killings, extortion, bomb blasts and so on.

Our women and children bear the brunt of the conflict.

Women have been raped, molested, tortured and killed. They have been displaced, forced to leave behind their homes and move to another place.

In an attempt to earn a living, many women have become commercial sex workers. Now a new trend has appeared whereby women are being used as arms traffickers or as couriers for bombs or extortion letters.

In an incident last year a young woman was shot by police forces in the main market in Imphal, the capital of Manipur. She was seven months pregnant and on her way to her husband’s shop along with her two-year-old son. Her son witnessed the killing. When we went to visit the family after the event it was clear the little boy was seriously traumatised. The same year, an 11-year-old girl was arrested by security forces in place of her parents and charged with harbouring militants and hiding their ammunition. She was only released when police arrested her parents.

Our own people as well as visitors often speak of the resilience of Manipuri women because they continue to struggle, to fight against all the odds. They hail our women campaigners for their courageous work safeguarding their families. For example, the Meira Paibi, which means torchbearer, is a mass movement of women human rights defenders. These women act as a watchdog of civil rights violations at the community level.

Yet the sad thing is that women are left out in policy making or decision-making processes.

For women in the state to really be free from all forms of violence society must broaden its outlook and a just solution to the ongoing armed conflict in the state must be found through dialogue. Our leaders should be in tune with the wishes of the people and act for the welfare of the people. Our underground revolutionaries should also respect the wishes of the public and strive to curb the violence as much as possible.

This year during the violence against women fortnight we introduced a new aspect – the academic campaign, where we spoke directly to students in the classroom about the issues.

We also held street corner meetings organised consultations on trafficking, held a motor rally and an essay competition, slogan competition and lyrics competition. We also organised a blood donation drive at the two state-run hospitals. We asked the medical superintendents of the hospitals to earmark the blood units for women and children who are victims of violence and conflict.

It is with the hope that women in Manipur will one day live in peace and free from all violence that we wear a white ribbon badge throughout the two-week campaign.