You are here: Home » Blogs & features » Voices from the Ground » No cash for flood-proof homes

No cash for flood-proof homes 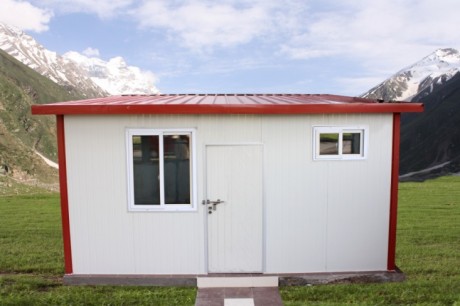 I spent this morning at a TV studio, discussing women’s issues on a morning show on Khyber TV. Most women don’t want to appear on television in Khyber Pakhtunkhwa province so they are always short of people to interview! This is a women-specific morning show and deals with women’s empowerment, with positive imaging of women. Usually television shows here have so many commercials that nothing substantial can be discussed but this one was different – I felt good about coming on it.

It is very cold in Peshawar these days, and a team of my staff members just returned from a remote flood hit area where people are still living in tents. I am trying to collect left-over money from another project to provide food and other assistance to these flood victims. They are in the sub-district of Tangi, which is near Swat, around two and a half hours’ drive from Peshawar. However, due to the floods, the road is very bad so it takes longer to get there.

All over Khyber Pakhtunkhwa many of those affected by last summer’s floods are still living in tents. They were going to shut down the official camps in winter, so the local people asked the government to leave the tents, saying they would manage the camps by themselves. So the government has just left them there and withdrawn. I don’t know how these people are coping.

These people can’t go back to their homes because they were destroyed or badly damaged by the floods. My NGO’s initial plan was to provide flood victims with around 300 new houses that would be environmentally friendly, even flood-proof if possible, but we could not find an appropriate design.

We eventually thought of importing the pre-fabricated houses that have been set up in Pakistan’s earthquake areas. These houses are less dangerous when a disaster strikes because they don’t have cement roofs and therefore minimise fatalities. But currently most funding seems to be directed towards providing people with immediate help, such as providing cement bags or bricks to build transitional shelters or money to fix roofs. The Sarhad Chamber of Commerce was spearheading this effort and most of the funding has been directed towards them.

I personally feel these are temporary solutions. As a result of climate change, more floods will come and these shelters and homes will be badly affected again. We wanted new designs for flood-resistant structures but it didn’t happen the way I planned. The funding we needed for our houses just did not materialise. It seems that most people are only interested in cost-effective relief work.