You are here: Home » Blogs & features » Voices from the Ground » Flood victims still in tents six months on 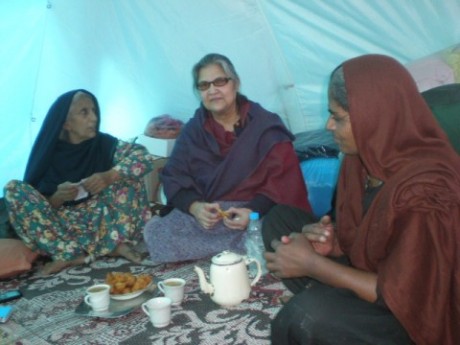 Last week I personally went to visit Sehra Sang, a remote, flood-hit village in the sub-district of Tangi.

The area, which is located near a tributary of the River Swat, was cut off after the floods and has only now re-opened for cars. There is a small community of around 75 households living here.

Further up there used to be another village but during the floods the river changed its shape and this small village, located next to the river, was washed away.

Many of these people have now moved to Sehra Sang and are living in tents. There are around 39 households that have no homes and no land to go back to.

In fact, the whole village consists of tenant farmers – the landlords who own the land in Tangi don’t actually live there.

The biggest issue currently facing these people is the fact that they don’t own their land and can by evicted at any time by their landlords.

My NGO wants to help this community, at least to try to fulfill their basic needs by building a shelter for them. So we have asked them to form a committee and talk to their landlords and ask their permission to build some transitional shelters. We have insisted that there are women on the committee as well as men and we are willing to help them arrange the meeting.

The older tenants have lived here for over a generation. It may prove more problematic for the new settlers who have come from the other village. I hope the landlords will allow them to stay.

We have limited resources, around Rs 500,000 (around £3,600) and would like to use this amount to build deserving families a one-room home, 14ft by 16ft, with a verandah. This low cost design meets the villagers’ requirements and they have agreed to it.

We can currently only afford to build the foundations for this one-room structure, which comes to roughly around Rs 40,000 (£290) per shelter. But we are confident that we will get further funding as the projects moves along – more donors will chip in. Something will happen.

Of course these will be cement structures that are not flood-safe but we have limited funds. Right now the people are living out in the open and it is both cold and wet – it has been raining a lot this February.

They are using additional sheets to cover their tents but really the tents are not strong enough to withstand further rain and stormy weather. It is quite tough on them and this situation can’t go on forever.

We hope to use local materials to keep the cost down. It will be a basic structure, nothing elaborate and we are hoping for a good response from donors. There are other NGOs working in the area – some are providing latrines, one is even setting up a demo model of a small house for a widow.

The problem is that many of the relief NGOs have very long processes and are wary of duplication.

By this I mean that the relief agencies usually want to do the whole thing themselves and take credit for it. If they see others involved in the same location, they withdraw. I feel they should be coordinating among themselves, rather than insisting on doing the whole thing solo.

As a result the responses are not quick and this means people are suffering.

We have gotten in touch with the International Organisation for Migration and are hoping for collaboration with their shelter support programme. Let’s see what happens next. The people in the village are getting food for now, but the World Food Programme won’t be providing food for much longer, perhaps another month or two. That is the ground reality.