You are here: Home » Blogs & features » Voices from the Ground » Favela pre-school gives children a place to dream 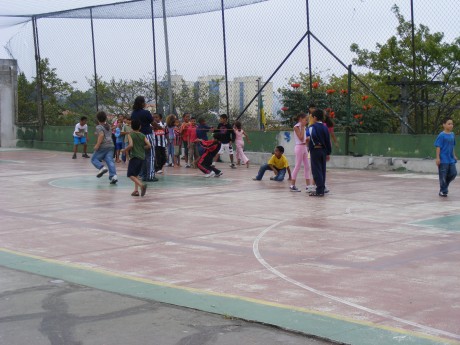 My new project to expand Casa do Zezinho is building the Casinha (“Little House”). We are planning a three-storey building near the school where 600 children aged between three and six can spend the day.

Our intent is not to take the kids out of the streets, but to provide a healthy street in which they can play. In addition to offering music, dance and theater classes, like the older students have here at the school, the Casinha will guide our youngest children to use their imagination by playing with simple, homemade toys like kites and soapbox carts. All of the government papers have been filed; now we are seeking financing. We want to have it built in two years.

The Casinha will implement the same methodology in play here at the Casa: look carefully at each child’s reality and needs. Every child needs to be heard, and one of the creative ways we are creating to listen is to provide them, literally, with “escape routes”.

At the Casinha, children will be allowed to leave the classroom if something is bothering them, sliding through plastic tubes to other classrooms. When the teacher sees a child coming through the tube, she must look at him or her and find out what has made the child want to escape.

Perhaps the other class didn’t engage the child, or maybe he or she is trying to run away from a problem that has been overlooked. The plastic tube will be wide enough for children only; it will be their escape route.

One of my greatest challenges here at the Casa is designing new ways to reach children who are coming from an inhuman reality – cruel even by adult standards. Recently, we have faced situations where very young girls have been sent by their stepfathers in the middle of the night to buy drugs at known trafficking points. Sadly, this is considered a less suspicious way for adults to get their fix.

There are also cases of fathers who allow their children to drink alcohol with them. The parents believe this behaviour is all right as long as they are doing it together. And who knows what other drugs they are sharing as well. When we call the mother in to discuss situations like these, we often hear responses like, “that’s nothing; at least he brings money home so she can eat.” It is difficult to deal with such disillusion.

Three years ago, we had an extremely tough case: a ten year old girl was prostituting herself. When I sat down with her, I had the sensation that I was talking with a skeptical adult. She told me not to worry because she could take care of herself.

“I don’t let them inside me, they only rub up against my thighs. Sometimes I make a lollipop.” Lollipop, as you can imagine, was the innocent word this ten years old used to describe the act of giving oral sex.

It was very hard for me to hear this. I knew that if I reacted with the shock and pain that was boiling up inside me, I would lose communication with her, so I had to keep very cool. In situations like this, you have to try to level with them.

When I asked her why she needed the money, I was shocked to discover that she spent it on food at McDonald’s, clothes and make-up. The rest she would hand over to her mother. So, I called the mother in. The mother said she didn’t know about her daughter’s activities but that the family needed the money she brought in to help feed nine children.

How was I to reach a mother who reacted this way? Well, the first thing we did was to take out the equivalent of what the girl would bring home in a month from our emergency savings fund. Our social workers immediately began to visit the girl’s house both to help the mother see there were many other ways to get by and to help the girl and her family in general. At school, we also made sure a psychologist worked closely with the girl. Fortunately, this horrible situation is now all in the past; she is 13 years old and no longer prostitutes.

Besides coming up with ways to reach these children, to provide escape routes from their reality, we also want to give them windows to dream about a future other than the one in which they are raised. These kids grow up among narrow alleys, learning how to keep their balance on makeshift bridges.

The heat means the exposed sewers smell even worse in summers, and the noise pollution from blasting radios is assured day and night. Sometimes, I wonder how they can even find it in themselves to be able to think in there.

We want to give them a place that allows them to look beyond these limitations. The Casinha’s future location includes a 60-year-old palm tree, on top of which we plan to build a butterfly garden. The children will be able to climb a rope ladder to go up and play. In the favela, reality is so demanding that dreamers are called lunatics. At the Casa and the Casinha, we work to change that.