You are here: Home » Blogs & features » Voices from the Ground » Building to start on new homes for flood victims

Building to start on new homes for flood victims 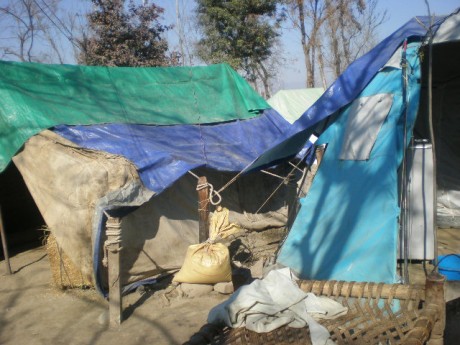 My NGO originally planned to build around 40 one-room houses for the flood-hit community of Sehra Sang village in Khyber Pakhtunkhwa who have been living living in tents for the last seven months. Now we have revised this figure down to just 17 houses.

The tenants were initially reluctant to ask permission from the landowners for the construction of these new houses, but we insisted that they do so. Only a couple of them managed to negotiate directly with their landowners and then they came to us for help.

You see, if we are going to be spending this money, donated by the Muslim community in Australia, then we have to ensure that it will be well spent. It is more cost effective for us if we can deliver construction materials for the houses all together instead of sending them to each villager one by one. We needed the group to get permission and the project was hence delayed. We were getting worried because in June the project ends altogether.

It is now worthwhile for us to move forward and start supplying the materials. We will set up a voucher system soon and get the suppliers from the nearby main town to start the delivery of cement bags and other materials. It will be done in stages and each stage will be inspected before moving on, for example the building of the walls. Then clearance will be given for delivery of further materials. This way we can make sure the money is spent properly on the construction of the houses.

We have also been informed that the remaining villagers, who are camped out in tents, won’t be living here anymore. They have bought cheap government land at a comparatively safer location elsewhere in the sub-district of Tangi. Islamic Relief, a charity based in the UK, is going to help them build houses.

The location of our houses will be closer to the river, and it is not that safe, but it is at some height. Besides, last year’s floods were just massive and record-breaking. We are hoping our new houses will be able to withstand lesser floods.

I have directed my staff to start work on this immediately since I’m off to Bangladesh tomorrow to visit an excellent one-stop crisis centre in Dhaka, where victims of violence can receive help and advice. The centre brings together police, lawyers and forensic experts so that they can work together on legal documents for the victims which are used court. This includes medico-legal reports that document the results of a violent attack, both physical and mental.

The trip has been arranged as part of my NGO’s regular programme on gender-based violence. We are taking along policemen and members of the government and health department from Pakistan. We hope to maintain this group when we return and see if it is possible to adopt some of the things we will see in Dhaka’s one window operation.