You are here: Home » Blogs & features » Voices from the Ground » Bombings become a way of life 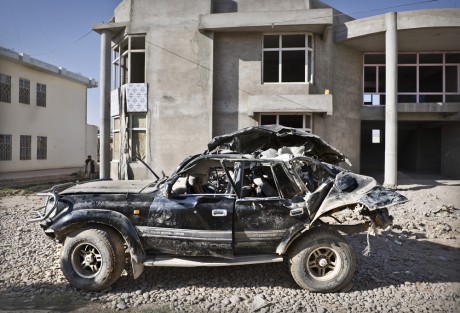 Three members of staff in my NGO were injured in last Friday’s attack on US diplomats in Peshawar. The Taliban attacked two US Consulate cars that were passing through University Town, near our office. My staff members were in their own car, crossing the road about 12 feet away from the US Consulate vehicles when the car bomb went off. Their windshield was smashed and the two people in the front of the car were injured by the glass. One of them also had serious leg injuries. The US Consulate cars are bullet proof and bomb proof so the passengers were relatively unhurt.

We give our staff a special five-day formal training session on security issues. Part of this is so they know what to do when a bomb explodes: duck, ground themselves and cover their ears immediately.

I think the staff member in the back who is more experienced remembered this training and ducked and covered his ears so he was not injured as a result. These bombings have become a way of life for us living in Peshawar so we have to be very careful when we go out.

Since returning from Bangladesh, I have been working on getting our task force (the group we took along to Dhaka) organised. We have also given a presentation to the social welfare department. We still need to get the attention of the health minister as well.

Our group is still keen to set up a small unit at the Lady Reading Hospital in Peshawar for victims of abuse. We would also like to work with the health department and target our overall health policy so that medical/legal aid to victims becomes the norm and part of the system. The Bangladeshis are willing to give us technical supports and share their experiences. I just hope the health department gets involved.

As for our flood relief and rehabilitation efforts, it turned out that out of the 17 households in Tangi District that we had selected for the construction of new housing, most had bought alternative land and rebuilt their houses elsewhere! We cannot build a second home for these people even though their lands are by the river and they would like to have another house close by to the lands where they work in the fields, especially during sowing season.

In the end we discovered that there are only four families that don’t have a home anywhere and we are now working with them. It will be very costly to work on building just four houses now.

We are also looking at buying them cheap land in the close vicinity since they don’t have the money to buy land anywhere. We are negotiating with them. Since their livelihoods are near the river, they would like their homes to be rebuilt there but the monsoon season will soon start and what if there is flooding again?

The places near the river are just not safe and there is a monsoon alert. We are wondering what to do and I think we will wait it out until the monsoon season has passed. We do have the money, however, and will spend it on these four families but for now we cannot risk construction during the rainy season that will begin in July/August.

Ramadan brings food for the poor