You are here: Home » Blogs & features » Voices from the Ground » Toy guns burnt in protest 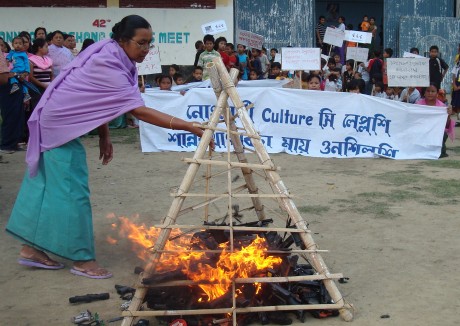 Today my son was reading out the newspaper to me. The main news was of a husband and wife shot dead in front of their three children by members of an insurgent group. The eldest child is just eight years old, while his siblings are six and four. The incident made me think once again how important the examples and lessons are that we give our children.

It also reminded me of one of our old campaigns that teaches children, and at the same time our wider society, that we should move away from gun culture.

High corruption, lack of employment opportunities and the ongoing insurgency in Manipur has left young people thinking that life is run either by the power of money or the gun. In this state, it is only those with guns – be they insurgents or the police – who are seen wielding power. So is it unnatural that for the young children, guns are their favourite toys?

We have seen the worrying influence of Manipur’s gun culture on our children for some time. Children only mimic in play what they see and hear in real life. So they play at shootouts, kidnapping, take on the roles of militants or police, and even act out “extra-judicial killings” by security forces.

There are all sorts of plastic guns in the market and most of them are so life-like that you can use them to scare people in real life. We feared that the transition from plastic guns to real guns for our children would become just as natural as passing from puberty to adulthood.

So three years ago we teamed up with the local Meira Paibi women’s groups – a local grassroots watchdog for human rights violations that I wrote about in a previous blog – and started a campaign in the area. We met the women and explained to them the larger problems of gun culture and how our kids should be weaned away from it, starting with their plastic toys. Then we talked to the children explaining how dangerous their toy guns could become. That summer, many of these children came forward with their mothers to burn their plastic guns in a symbolic gesture. We gave the children sports equipment and books to encourage them to play healthier games.

Since then we have organised other symbolic burnings of toy guns in districts around Manipur together with other civil organisations. The most recent one took place in April in Thoubal district.

The campaign was a dangerous move for us as we were indirectly asking both the state security forces as well as the insurgent groups to think about the gun culture. It was a tense time – but I think it was worth the nail-biting. We know one campaign cannot change everything in the state. Change will come piecemeal, and it will take many more campaigns.

Another story in the newspaper today is about how most of the insurgent groups in the state are agreeing to come together under one umbrella body. This is a huge step as there are so many insurgent groups and factions in Manipur today. I believe this move has come about in part as a result of campaigns like ours.