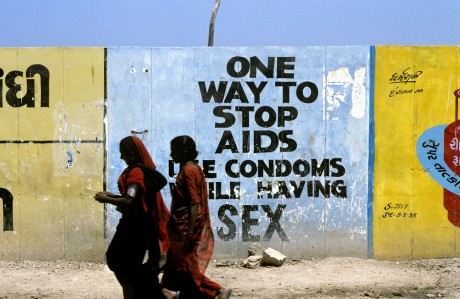 In Manipur, northeast India, HIV/AIDS has spread from injecting drug users to their wives and children- Paul Smith / Panos Pictures

I met an HIV-positive woman recently who had been bedridden for more than a month. Her husband was an injecting drug user (IDU) and was HIV postitive. In Manipur, HIV/AIDS was first discovered among injecting drug users but has since spread to the general populace, especially women and children.

This woman’s husband died in January this year, leaving her with two children to care for alone. Just two months before, she had found out she was HIV positive.

My own husband was also HIV positive. Though luckily my status is negative I could empathise with the woman’s tensions and troubles.

The first issue that HIV/AIDS widows face, regardless of their HIV status, is that of stigma and discrimination, followed closely by financial burden.

In Manipur inheritance rights are usually passed down from father to son. In a few cases, daughters and wives are given a share, but that depends on the goodwill of the family. Moreover, the avenues for work are very few for a woman.

The main choices for women, and especially widows with no financial support from family members, are selling vegetables, working in the river quarries, construction work, and, when all else fails, sex work.

When I went to meet this woman she was living with her parents. I am sure she had been under a lot of stress, wondering how to feed her children and how to get treatment for herself. Both she and her husband had faced harassment from his parents and other family members due to their HIV positive status. She hadn’t even been allowed to take part in her husband’s funeral rites.

She was in a semi-conscious state, unable to even talk. She had hidden her HIV positive status and had been refusing to access health services for a long time.

A few days before I met her, however, she had been persuaded to take her CD4 count test. Her CD4 count was a shocking 10. It was a miracle that she was still alive.

She had a thrush infection in her mouth but fortunately there were no other opportunistic infections.

The first thing I said to her was that I am like her. I told her my own story. I sought to encourage her as much as I could, telling her not to worry too much.

I felt so bad for her and so angry with her husband who had given her this virus. We could not take her to a hospital as there was a bandh (strike) on that day.

The next morning I took her to see a doctor at his house. She is getting treatment for her oral thrush now. We are also getting her a medical examination to see if she has any other problems such as TB or hepatitis. This is necessary before we start her on anti-retroviral treatment (ART) medication.

I will be going to see her for a follow-up, and to talk to her again to encourage her further.

What I find shocking about the incident is that this woman lived just a couple of kilometers from the capital city of Imphal. There are hundreds of NGOs working in the state to fight the epidemic, to spread awareness about it and to encourage people to reveal their status and access medical services. Yet this woman hid her status, fearing stigma and discrimination. Her parents also lacked awareness – knowing her husband was an injecting drug user they should have talked to her about her own status.

Manipur is regarded as being one of the most high-risk states in India for HIV/AIDS. Unless we change people’s mindsets, this won’t change.

We need more HIV positive role models, such as Khundrakpam Pradipkumar, who has won the title of Mr Manipur for bodybuilding and has competed in national competitions. He does not hide his status, hoping to show people living with HIV/AIDS that they can still lead a normal life. But still more work is needed.