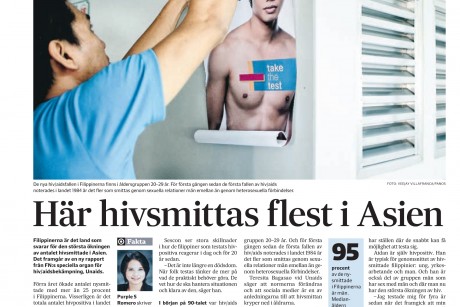 To mark December 1 – World AIDS Day – Panos London produced a series of features exploring the issue of HIV and AIDS from different angles. As a package they offered readers in Sweden, Poland, Spain and the UK insights into the experiences of people living with, fighting against and being educated about HIV and AIDS in a range of developing countries, including Cameroon, Argentina and Nepal.

We had some fantastic coverage in Sweden. Daily newspaper Svenska Dagbladet led its World AIDS Day coverage with a front page story from Zambia written by local journalist Zarina Geloo (with photos by Richard Mulonga). The article, which continued inside as a two-page spread, highlighted the progress made by the country in the last 20 years in its fight against HIV – and the challenges that remain. The feature included an interview with an HIV positive woman who has been able to have a healthy baby thanks to access to ARV drugs. It was accompanied by a side-bar on HIV and AIDS activist Winstone Zulu, who died in October.

Zulu, the first Zambian to publicly acknowledge his HIV positive status in 1990, was a towering figure in civil society efforts to combat HIV and AIDS and tuberculosis both nationally and internationally. Three Q&As ran alongside the feature, from Argentina (by Ana Belluscio), Cameroon (by Anne Mireille Nzouankeu) and Nepal (by Smriti Mallapaty).

Swedish daily Sydsvenskan also published a story from Africa, about an NGO called Grassroots Soccer that uses football to teach schoolchildren about HIV in Cape Town. The school that journalist Anna Majavu and photographer Nikki Rixon visited is in Nyanga Township, one of Cape Town’s poorest communities and also badly affected by HIV. In 2005 the Desmond Tutu HIV Foundation put the prevalence rate in the area at 29.1 per cent. The feature was also picked up by Gazeta in Poland.

A Panos London feature about male sex workers in Cameroon became the fifth most-read feature on the Guardian’s global development website and drew attention to the stigma and discrimination faced by this marginalised group. The piece, by Anne Mireille Nzouankeu with photos by Jean-Pierre Kepseu, highlighted the barriers to accessing HIV prevention and treatment programmes. These barriers include outright denial of treatment as described by Aurélie, a transvestite sex worker in Douala, to the journalist. As well as illustrating the problems this prejudice causes for individuals, Nzouankeu also points out the risk such neglect poses to the rest of society too.

Finally, from the Philippines, Purple S. Romero wrote about rising rates of HIV in the county in a feature told from the differing perspectives of two HIV positive women. The piece was published in Svenska Dagbladet with together with striking photos captured by Veejay Villafranca.

Read more by clicking on the articles below:

(you will be directed away from Panos.org.uk) 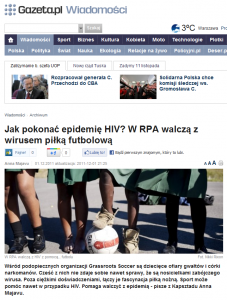