You are here: Home » Blogs & features » Voices from the Ground » Meet Bhan Sahu – our new blogger from India 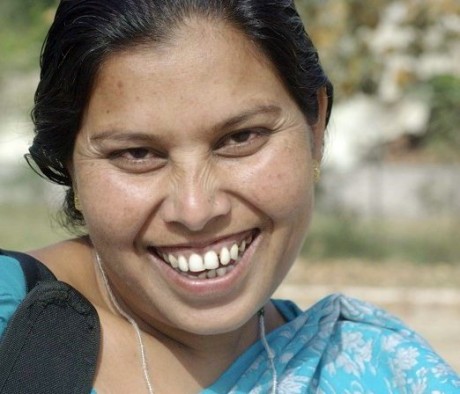 Panos London would like to introduce Bhan Sahu as the newest contributor to our Voices from the Ground blog. Bhan, 40, is a social activist in Rajnandgaon district of Chhattisgarh state in central India.

In Chhattisgarh, the government is facing an armed uprising by Maoist guerrillas (also known as Naxalites), said to be the biggest threat to India’s internal security. Bhan works with people from marginalised communities – mostly women – who are faced with this armed conflict as well displacement due to various mining and other development projects. In her blogs, Bhan will describe the challenges of working in an underdeveloped and conflict-ridden district and also look at solutions that are possible to bring through organised, community efforts.

Since Bhan cannot write in English, her experiences will be recounted, in her own words, by Indian journalist Stella Paul, who will meet up with Bhan once a week to hear what she has been doing. Stella said that she wanted to interview Bhan because she embodied the struggle and contribution of thousands of poor and marginalised women, in bringing social changes at the grass root level.

Stella writes: Bhan works with Dalit and tribal people in Chhattisgarh who have been displaced by mining and other development projects. Faced with starvation, men from her district migrate to other states where they either become bonded labourers, or turn into petty criminals. Women, on the other hand, are usually trafficked and sold in brothels.

These landless tribal people are also often caught in the ongoing war between the government and the Maoists; if they protest against the government and the development projects, they are labeled as Maoist spies. By uniting them and encouraging them to fight for compensation and demand an alternative livelihood, Bhan is trying to check the forced migration and help these vulnerable men and women live a life of dignity.

She has no educational degree, no regular monetary support and is very vulnerable herself, facing the danger of detainment and arrest every now and then. To write about her is to connect her with the larger, global community and open possibilities for her to get support from the world which has otherwise little access to these conflict-ridden areas.

Due to the Maoist conflict, the news outflow from Chhattisgarh is very limited. As the media obsessively focuses on this conflict, the only news one gets is about ambushes or encounters between the Maoists and the government forces. This has resulted in a virtual blackout of other news such as non-payment of compensation, forced migration, human trafficking, crop failure due to drought and lack of healthcare. In January 2009, Bhan Sahu formed a women’s group called ‘Jurmil Morcha’ with local tribal and Dalit women. This group works to bring these forgotten issues to light by organising rallies, meetings, mass petitions and hunger strikes. In addition, Bhan also makes videos to present to the world as visible proof of the wrongs that she and her community witness.

The women in Jurmil Morcha are from families living below the poverty line – earning less than $15 dollars a month – and, have little or no school education. To mobilise and build a social movement with these women, for whom the biggest challenge is to get a square meal, is an achievement in itself. Since its formation, Jurmil Morcha has successfully fought for the release of Dr. Binayak Sen, a local human rights activist arrested by the police for anti-government activities. They have also campaigned for, and received, compensation for marginal farmers in four villages after a crop failure due to severe drought.

Though their resources are meagre, under Bhan’s leadership, women of Jurmil Morcha have been building partnerships with other social movements in India. They have traveled to Uttar Pradesh, Jharkhand, Orissa, Rajasthan and Karnataka, participating in campaigns for social justice, rural employment and against repression and sexual torture.

Bhan Sahu, along with the other group members, does not own a home. They live together in a mud hut, which used to be a rice paddy store, in a remote tribal village called Pangri. For the members of Jurmil Morcha, as well as for the thousands of landless tribal people they work with, she is one of them; she is a part of their extended family who understands and lives their problems and who they can trust, love and look up to.

Bhan joins “Ambra” (Takhelchangbam Ambravati), a grassroots volunteer with a local NGO near Imphal, the capital of Manipur in northeast India, Maimoona Shahzadi, a teacher in a rural school in Pakistan and Kaidia Samake, a widow who lives in a village in Mali.

We will be introducing some more new bloggers soon…