You are here: Home » Blogs & features » Voices from the Ground » Trials of tending the women’s garden 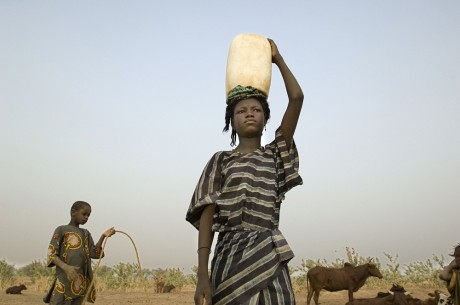 Women here suffer a lot when we don’t have access to water. Until about four years ago we experienced some difficulties in finding drinking water. At that time there weren’t any pumps in the village and the wells weren’t sufficiently deep to reach water for a long time.

In the morning we would queue near the wells until late in the night. When that happened we weren’t able to wash our sorghum grain properly to cook meals. We used to go as far as Heremakono (a village 7km away) to look for drinking water by foot.

But those difficulties are over now. Currently in my village we don’t have any difficulties in finding drinking water. There are many wells and pumps that contain water all the year round.

The only water problem is in the women’s garden. There is only one well in this garden and in the dry season it runs out, so we can’t water the vegetables we want to grow in the garden. Before the garden’s well dries out we grow vegetables to eat but the plants can’t survive more than two weeks when the well is empty.

Another problem with this garden is that the cows destroyed the wooden fence. Eventually many women abandoned the garden. I can say we don’t have a good garden here now.

Rainfall shortage is also a problem. For instance the shea butter is a source of income for us, but when the rails fall short the shea trees don’t bear many fruits. And that means less income from shea butter.

When you cut the trees the flowing water removes some of the soil and its fertile parts. The lack of trees is one of the causes of drought. When an area doesn’t have many trees it dries out. The sun dries the soil where water should be kept because of the trees. If there are many trees when it rains they keep the soil wet, which is good for human beings and the animals there. Even the shea trees don’t make fruit when there isn’t moisture under them.

This is why here in Gwelekoro we decided to abandon cutting the trees in an area that is now a forest. Those who refuse to respect the ban of the trees cutting in this place are punished by the village council. The solution to rainfall shortage belongs to God, but people can also do something.