You are here: Home » Blogs & features » Voices from the Ground » The biggest challenge is apathy 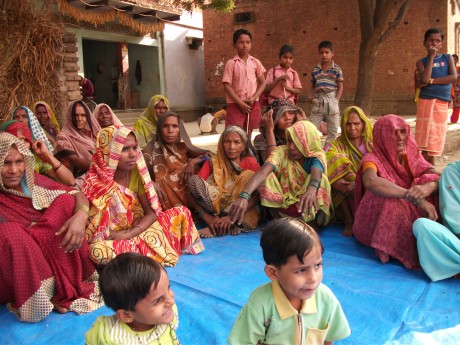 Since the formation of panchayati [village councils], the government has introduced many plans for village development. Today, from cleaning the lanes to digging a community pond, there is a government scheme for everything.

But the majority of villagers are unaware of these schemes. All they do is cast their vote and believe that the panchayat [village council] will take care of everything else.

Let me give you the example of Kaudikasa, a village in my area. The groundwater in Kaudikasa has a high level of arsenic. As a result, many of the people in the village suffer from blisters on their hands and feet, chronic diarrhea and headaches.

I have visited this village a few times. On learning of the arsenic problem, I asked the villagers if they had tried to find a solution. They replied: “The government doesn’t care.” But when I contacted the district health department, they told me that a water treatment plant had been set up outside the village and that water was being supplied to the village for everyone to use.

However, Kaudikasa village is divided in two parts. On one side, which has electricity, water and a good road, live the upper caste people; on the other side of the village live low-caste Dalit people and tribal people. The drinking water pipeline has not reached this side of the village yet and people are dependent on bore wells, which contain arsenic.

These Dalit and tribal families in Kaudikasa are not only unaware of the government scheme for safe drinking water, they also do not know that the facility is being enjoyed by only a handful of people and that they are being deprived of it. Even when I informed them of this, their reaction was: “What can we do? Nobody cares for us.”

This, I think, is the biggest challenge of a social activist: the apathy of the community members to improve their own living conditions and claim their democratic rights. In 2009 I formed Jurmil Morcha – a people’s movement – in a village called Pangri, to confront this challenge.

The ownership of Jurmil Morcha belongs to the village. Villagers meet every month and discuss everything related to the village: the problems, the schemes, what is working and what is not. The government is made of us and the welfare schemes – from sanitation to water supply – are carried by us because it is the villagers who are employed by the Panchayat. So if something is not working, it means some of us are not doing our work well. We have to correct those small faults. Change has to begin with us.

I am now trying to see the same change in Kaudikasa and I am hopeful of making it happen.