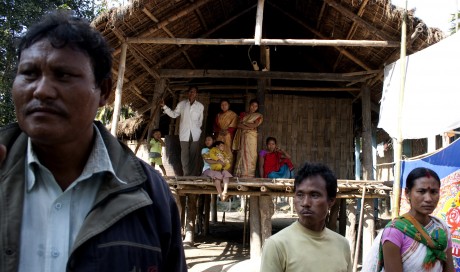 Five print and one television journalist contributing regularly to media in Northeast India have finished their fellowship awarded in May 2011. Journalists took part in a programme aiming to bring together the research and media communities to produce in-depth stories on important social and economic issues in the region.

The current programme’s focus was on the controversial topic of dams and development in the Northeast India. Over the course of six months the Relay fellows were brought together with researchers, took part in the orientation workshops, received media briefings on the issues and organised field trips to the affected regions.

As a result of the programme, fourteen articles and a documentary film were produced, lending a voice to the indigenous communities, civil society representatives and academic research.

We are pleased to present our journalist fellows and their reflections on the experience:

Sandeep is an independent filmmaker who has worked on more than 10 films. Sandeep set out to produce a documentary film on the downstream impacts of dams in the Lower Subansiri Basin in Assam (“Subansiri… Upstream, downstream”). He was particularly interested to study the effects of dams on biodiversity and livelihoods.

Mr Loukrakpam is a staff reporter for Poknapham Daily where he has worked since 2008. His focus areas include: rural reporting, development issues, public health and hygiene. Poknapham Daily is Manipur’s most widely circulated daily newspaper.

Mr Loukrakpam’s articles focused on the three dams of Manipur – the Mapithel dam, Iyhai dam and Tipaimukh dam – and the downstream impacts on Manipuri society and economy. The stories were a result of many interviews, field visits, fact findings and research enquiries. This in-depth investigation has also helped to identify the lack of research studies on the downstream effects of dams.

Dhanabanta said that the importance of using research and first-hand reporting from local communities is especially important. Reflecting back on the fellowship, he said:

“Panos is giving [the] chance to media personnel like me to continuously earn more knowledge through fellowship. The fellowship seems to pinpoint not only a need of mere media reporting but also research reporting.”

Mr Bhuyan is a senior staff reporter at a reputable Asomiya Pratidin – one of the most popular and highly circulated daily newspapers in Assam. He is also an active member of Guwahati Press Club, which he has been affiliated with for over 10 years. Nayan focuses his reporting on environmental, social and ethnic issues.

Mr Bhuyan wrote two articles, both published in the Asomiya Pratidin, reporting on the environmental and social impacts of dams in the Northeast region. He highlighted problems faced by local communities, such as loss of livelihood, displacement and increased risk of natural disasters. His articles have also drawn attention to the lack of transparency and corruption surrounding the construction of the dams. Mr Bhuyan engaged different stakeholders in his research process, interviewing local communities, anti-dam activists and public representatives.

He agrees that using research in media reporting opens up new channels and enriches the stories:

“I firmly believe that research can be an effective tool [helping to] authenticate the news reporting in every social issue. Research enlightens the key issues of a particular subject, and the reporting based on the research becomes a vital document.”

Ms Roy is a freelance journalist publishing her stories in the leading Assamese newspapers and magazines. She was interested to study and highlight the effects of Hydro-Electric project in downstream areas like the Dhemaji and Lakhimpur districts of Assam. Her objective was to raise debate and awareness amongst different stakeholders in order to create policy that takes account of indigenous people’s lives.

Niba published two feature articles in Asom Bani, an Assamese Language Weekly, focusing on mega dams in the Northeast and on Kurichu hydro-electric project. Her stories underlined the disastrous effects of dams for the indigenous communities of the lower Assam.

Ms Roy has also emphasised that the in-depth articles produced through the fellowship programme filled the gap of underreported effects of dams on downstream areas. Nibha said that reporting research is an important contribution to the region and a country as a whole.

Mr Mazumder is a correspondent for the Eastern Chronicle, a national daily newspaper printed in English. He also writes for the Sentinel. Mr Mazumder is a representative of the local civil society, acting as the President of an environmental NGO.

Mr Mazumder produced four articles published in the Eastern Chronicle and the Sentinel. Sanjay’s articles have focused on the social and environmental issues of the Pagladia dam, situated near the Bhutan border. When researching his stories, Mr Mazumder made use of experts’ interviews, met with civil rights activists and spoke to local communities affected by the construction of Pagladia dam.

Reflecting back on his experience during the fellowship, Mr Mazumder stressed that articles based on research findings are much more informative for the readers:

“Researchers helped to build in depth story and provided vital information. (…) The process was designed to offer the opportunity for dialogue among different interest groups”

Sanjay’s articles can be found here and here.

Mr Pertin is a reporter for Echo of Arunachal, the first newspaper of the state of Arunachal Pradesh, which was established in 1988 and is printed in English. Along with local and international news, Echo of Arunachal is also dedicated to rural reporting and has reporters based throughout the state.

Azing has reported on the social cost of one of the biggest projects of the Arunachal Pradesh government’s hydropower plan set in Siang Valley. His article drew attention to the land rights dispute and potential risks to natural habitat. Through interviews with local communities, the article has also emphasized the potential loss of indigenous people’s livelihoods.

Mr Pertin has received a lot of positive feedback from the local anti-dam activists and representatives of civil society, who used the articles to pressure the government to scrap the Lower Siang Hydro Electric Project. Field trips have also been acknowledged by the local communities who felt their voices were finally heard and carried forward. Mr Pertin said:

“(…) the fellowship has really helped me in disseminating and flagging issues on dams through the reports which otherwise could have been never written.”

Mr Pertin has agreed that research is necessary in obtaining insights and reporting more informative stories:

“(…) Panos Fellowship and the orientation workshop, the direct interaction and discussions with the researchers and subject experts were enriching as many doubts and facts which I was not aware were cleared and gained.”

You can read more about this project on the Panos Relay website.