You are here: Home » Blogs & features » Panos London Blog » See the writing on the wall 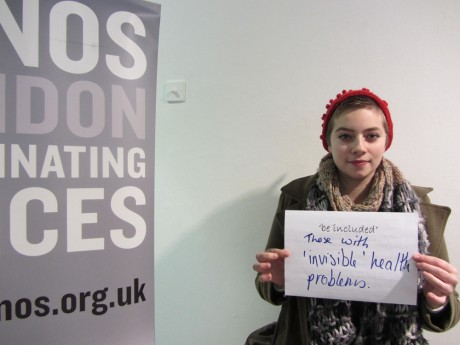 Students, visitors and Panos London staff braved the snow and cold temperatures to visit London’s first Student Film Festival at the London College of Communication at the weekend. It was a chance for students to find out more about the industry, show some of their work and get fired up about the films and shorts on offer. Panos London was there because we want to inspire the next generation of film-makers to include the voices of those who are not normally heard. We issued a challenge: 72 hours for five filmmakers to make a short film about a person or group poorly represented in the media.

To mirror the 72 hour film challenge we asked those attending the festival to tell us who they thought were either misrepresented or under-represented in UK media coverage – and why. The response was amazing as so many people felt it was an important question, and had no trouble identifying who they thought deserved more recognition. People took the time to think carefully about their answers and some gave more than one example of whom they would like to make a film about if they were given a chance.

All their answers can be found in our #beincluded tweets. Many contributors named people they feel are almost ‘invisible’ in the UK media (such as older gay, lesbian and transgender people), others felt that certain groups received plenty of exposure but were mainly shown in a negative light, for example, young people or Gypsies. Many agreed that such individuals needed a voice in order to educate the public about their contributions to society, allowing for perceptions to change. What was most clear from all those we asked was that people want to be given a chance to give their opinion and contribute to debates – and that they want those debates to be more inclusive.