You are here: Home » Blogs & features » Panos London Blog » P is for G-nut and other schoolgirl errors

P is for G-nut and other schoolgirl errors 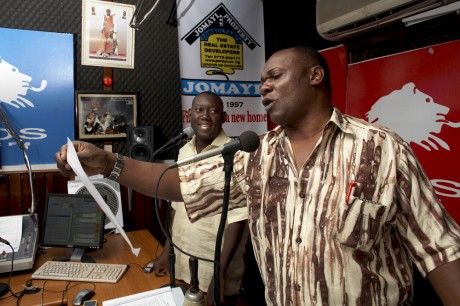 The scene: a sticky radio office in Gulu, Northern Uganda, polite conversation and radio producers wondering what on earth this hot and bothered, pink, dishevelled Englishwoman wants from them (I was there with Panos Eastern Africa as part of a Panos project to create a network of radio stations sharing programmes on development issues in Uganda). So my Kenyan colleague breaks the silence.

“Do you know what a peanut is?” Silence from the staff who look blank but I twig a bit uncomfortably that the question is for my benefit. “P-nut?” someone says eventually, shaking his head. “G-nuts, we have G-nuts not P-nuts.”

In fact there are plenty of what I would call peanuts in Uganda and this radio station put out a regular agricultural radio programme. But they were right and I was wrong. Why would these radio producers know what a peanut is? They’re called groundnuts in Uganda, which is the point my colleague wanted to make. It was my ignorance, not theirs.

I had just commissioned a radio programme from Senegal called Crunch time for nut farmers on the peanut / groundnut industry and the effect of privatisation and I had sent it round to our network of radio stations via our then global radio network Interworld Radio. Many of the members were FM stations in English-speaking African countries, including Mega FM, the station in whose office we were now standing. In fact the Senegalese reporter had originally referred to groundnuts in his script but I changed it to peanuts, believing this brought it closer to home for listeners. The problem was the listeners I was altering it for were people like me, not the producers and listeners we were trying to reach.

Panos has a history of making radio programmes about fundamental issues – water, sanitation, malaria, TB, HIV, land rights, food, and farming, gender (see a sample of features at the bottom of this page) – with an emphasis on going out and recording the views of ordinary people not big-wigs. Radio programmes – vivid, direct, emotional – are a stunningly effective way to bring these experiences home to people. But the peanut experience taught me a lesson, which is one I am grateful for, even though I was clearly being ticked off at the time. One, that I was ignorant of my audience and two, that it doesn’t matter how well made a programme is, it needs to speak the language of the listeners. And that’s not just whether people literally understand the language (English versus so-called vernacular for example) but that the person making the programme and the presenter understand the audience they are speaking to. And that’s something that comes with experience and intuition, I think – market research isn’t enough.

So far, so obvious maybe but this can easily be forgotten despite the best intentions of NGOs and multilaterals putting money into media development. And of course radio stations know very well to play the game with NGOs and intergovernmental organisations. On the same visit to Uganda, I met a senior executive of a commercial radio station.

“Oh yes,” he nodded. “We are very interested in those issues, yes, poverty, income-generation and especially in the education of the girl-child.” Great, I thought, though struck slightly by the fact this journalist had internalised the language of the UN/INGO sector, and then tuned in to hear the talk show sandwiched between non-stop music. That day the call in topic was “is bigger better” and the chat was as ‘nudge nudge, wink wink’ as you would expect.

Of course that’s not to say they aren’t serious about the education of the girl child, but the reality is they are no more likely to devote much time to the education of the girl-child in their peak slot than TalkSport is likely to run a literacy hour during drive-time. But nor can such stations be missed out if you need to reach their listeners. You just need to be careful not to believe everything you hear – especially when it’s exactly what you want to hear.