You are here: Home » Blogs & features » Voices from the Ground » Meet Mary Madiga – our new Dalit blogger from India 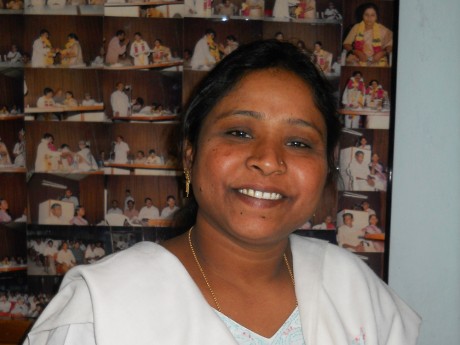 Meet Mary Madiga,  the newest contributor to our Voices from the Ground blog. Mary Madiga, 39, is a Dalit social activist in Hyderabad, the capital of Andhra Pradesh state in southern India.

Dalit, which literally means “the downtrodden”, refers to a group of communities who are considered as socially “backward” (an official Indian government term of categorisation) and “impure” by non-Dalit communities.

As part of the caste system, identified in particular with Hinduism, they are considered the lowest rank, which is why many Dalit families have converted to Buddhism and Christianity in the past few decades. Despite this, they still continue to be seen as Dalit and are treated as “untouchable” and “polluting” even after converting.

Whether in the government or the private sector, Dalits are offered the lowly jobs like sweeping, cleaning roads and drains, waste-collection, skinning of animals etc. In most places in India, they are barred from entering temples and are not allowed to share food and drinks with non-Dalit people. The constitution of India has given special status and guaranteed special facilities such as quotas in government jobs in order to place them at a par with non-Dalit communities. But little has changed at the community level where the majority of the Dalits still live in utter poverty, with little education as other communities refuse to treat them as equals.

Mary Madiga fights against this continuous ill-treatment of her community. Mary was born into a family of cobblers – considered one of the lowest professions in the society as they work with leather, the skin of dead animals, which is considered polluting. Girls in the community had never been educated.

Mary was the first girl in her community to go to school and has risen to the level of a firebrand social activist who relentlessly campaigns for Dalit people’s rights to education, work, land and participation in the political process.

Since Mary cannot write in English, her experiences will be recounted, in her own words, by Indian journalist Stella Paul, who will meet up with Mary once a week to hear what she has been doing.

Stella said that she wanted to interview Mary because she is an amazing example of how an ordinary woman can rise as a leader, despite living in abject poverty and experiencing utter humiliation, physical abuse and discrimination as a Dalit woman.

Stella writes: “In rural Andhra Pradesh, each year scores of Dalit youths join the armed Naxalite movement to avenge the social and political injustice they experience. Mary has also undergone a lot of humiliation and abuse all through her life; she was even jailed and tortured for seeking a better status for Dalit people. Yet her faith in the constitution has remained unshaken and instead of taking the path of armed revolution, she firmly stands on the path of democracy and fights for social justice through peaceful means.”

After working and fighting for various civil society organisations and political parties, three years ago Mary founded an all Dalit women’s organisation called Telengana Mahajan Mahila Samity. The group works to highlight and curb atrocities against Dalit youth and women and police harassment of Dalit women. She organises street protests, sit-in demonstrations and rallies and also encourages Dalit men and women to exercise their rights by casting votes and participating in elections. This makes her a true leader who stands for democracy and peace in a land where ambushes, mine blasts and killings are features of everyday life.

Mary joins Bhan Sahu, a grassroots social activist in Chhattisgarh state in central India, “Ambra” (Takhelchangbam Ambravati), a grassroots volunteer with a local NGO near Imphal, the capital of Manipur in northeast India, Maimoona Shahzadi, a teacher in a rural school in Pakistan and Kaidia Samake, a widow who lives in a village in Mali.