You are here: Home » Blogs & features » Voices from the Ground » We need to talk about our children 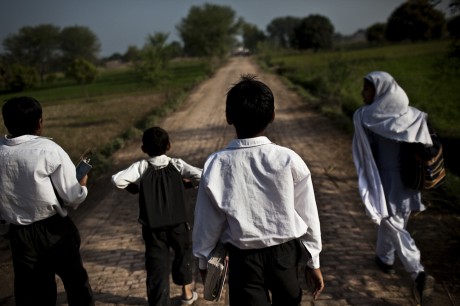 I have been quite depressed lately. There was this boy in my class called Zeeshan, who’s around 14 years old. He was from the local community. His parents would quarrel a lot and finally this January he was pulled out of the school. His parents’ disputes really hurt him. Zeeshan was always a quiet child; he would always be tense and would not get involved in any activities. I tried talking to him to find out what was going on and he would not open up to me. Then his cousin, who is also in the same class, informed me about the situation at his home. I then asked his group of close friends to talk to him – perhaps if he talked about it he would feel less tense. But the conflict between his parents only increased and it started affecting his academic results. His interest in his studies declined and he started showing poor results in the monthly tests. He was an above average student and it really upset me to see his grades going down.

I called up his mother to let her know what was going on in school. I wanted to counsel her to improve the environment at home so his results could improve. But she just wouldn’t come for the parent teacher meetings. She would not meet us, though I left so many messages at her house. Finally this January, she left our locality and returned to her parents’ house. She took her son with her and now he has stopped going to school. Last we heard he is training to become a mechanic. So his academic life is now completely over and he is expected to earn for his mother.

I have realised from this incident just how important parent teacher meetings are. Parents must talk to teachers. Some parents take these conversations very seriously but others are not ready to listen at all. I feel very sad about what happened to Zeeshan and have discussed the case with the other staff members. He was a good kid and if he had stayed in school he could have been among the top five students in his class today. Up until a month ago, I was still hoping that he would come back – even with a gap in his studies we could do something to help him, perhaps offer extra tuition. But his mother just did not realise the importance of him staying in school. Now his friends will go ahead and he has been left behind. His parents really have spoilt his future.

These days we are preparing the final year results. I must say the parent teacher meetings have generally produced good results. Overall, the children’s grades have improved a lot. Take the example of Qasim, the child whose mother came to us in tears because he was not doing well in school. Thanks to all the extra tuition, there has been a dramatic improvement in his grades. The boy realised that his mother was very concerned about him and he felt that he was important to his family and in consideration for his mothers’ feelings he really studied hard. I am so glad his mother came to us and we learnt more about his background. That enabled us to help him by counselling him and by helping him to improve his grades. It is the neglected children who suffer the most – when their parents don’t give them proper care they just stop studying and go into bad company. There was nothing wrong with Qasim. When his mother got involved he started studying and now he has achieved such good results.