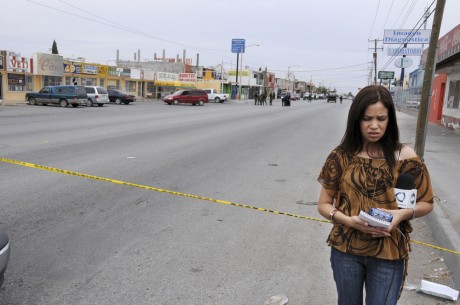 Mexico is one of the most dangerous places in the world to be a journalist today. Under pressure to take action, on the 30th of April, Mexico’s Parliament unanimously passed a new law to protect human rights defenders and journalists.

Yet in the same week as the law was passed, four journalists were killed in the state of Veracruz, including Regina Martinez, a correspondent for the political magazine Proceso who was found strangled in her home.

What does this new law mean for human rights defenders and journalists in Mexico?

Susana: It means that people who are defending human rights have a particular recognition and protection. It is now recognised that undertaking such activities in Mexico at this time is particularly dangerous.

Graciela: If anyone is attacked whilst defending the human rights of themselves or of others, this law will support their fight for justice. They will be able to go to an entity of the Mexican government and say, “I am in danger, you need to give me some protection”. The law recommends a very quick and concrete response to human rights defenders or journalists who are asking for protection measures.

Why is the approval of this law important at this time in Mexico?

Graciela: In July there will be presidential and parliamentary elections in Mexico. Mexico is known for developing lots of laws which are not implemented, . However, this law was approved by consensus; there was not one single vote against the law in the senate or the congress. This gives the law a strong foundation for the future.

The way it was developed is also significant. Civil Society Organisations were the ones who made the first draft of this law, and worked to convince senators to develop it. In this sense, it represents an important historical moment in terms of democracy in Mexico. CSOs have been able to work together in a unified way, and have also worked together with the senate to build this law.

Susi: This is in itself significant – in the context of violence and frustration and difficulties with collaborating with the authorities… for organisations to be able to overcome this context and learn to work together and to work with the authorities.

When did civil society organisations come together then to work on this law?

Susana: It all started in 2008-09. In 2009 Mexico was reviewed by the UN Council. As the violence increased in those years, the Mexican civil society working to promote human rights began to realise that they were subjects of attacks; that they were victims too. At this point they started presenting their needs for protection before the Inter American System of Human Rights, before the UN and before the Mexican government.

In 2010 a network of human rights organisations came together to develop the idea of a government mechanism for protection, and as a result of this process some members of this network started to see the need for this to go further, the need for a parliamentary law.

Now that the law has been approved, what are the priorities for organisations like PBI and CMDPDH in Mexico?

Graciela: Before the next presidential and legislative elections of July 2012 we need to closely monitor the implementation of the law and the development of the governmental protection mechanism itself. And of course this monitoring needs to continue after the elections. There is sufficient time whilst the current government is still in power to make sure that necessary protocols are in place to have a functioning mechanism.

What are your reflections, or feelings, on the law being approved?

Susana: There was definitely great happiness to get the unanimous approval, the fact every member of the congress and senate voted to approve the law. And then the minute of silence for the journalist killed on Saturday… For anyone working in Mexico for human rights, the approval of the law on Monday was very moving… we couldn’t have imagined this happening a year ago, to see such a concrete development and change in the minds of people, this is very moving..

Susi: The process of developing and lobbying for the law has also contributed to relationship building between CSOs, embassies and international NGOs. PBI have been at the forefront of facilitating dialogue between these different entities. In fact in the weeks running up to the law being approved PBI and Amnesty have been working very closely to ensure that there was enough pressure from the UK (eg through the All Parliamentary Group, Alliance of Lawyers at Risk etc) to ensure the law was brought before Congress for approval.

Graciela: For us, this process has been challenging; it is the first time we have worked in a legal process. But I think it has given us a very important background for further work in Mexico and most importantly it resulted in working together very closely with other CSOs and we have developed deep relationships with the interest to work together in the future.

To find out more about PBI please visit their websites: http://www.peacebrigades.org.uk  and http://www.pbi-mexico.org

A CAFOD exhibition “Silenced: Fighting for press freedom in Mexico” to commemorate Mexican journalists who have lost their lives as a result of their work is being held at the Guardian offices until the 13th of May.