You are here: Home » Blogs & features » Voices from the Ground » ‘Land and natural resources must belong to the people’ 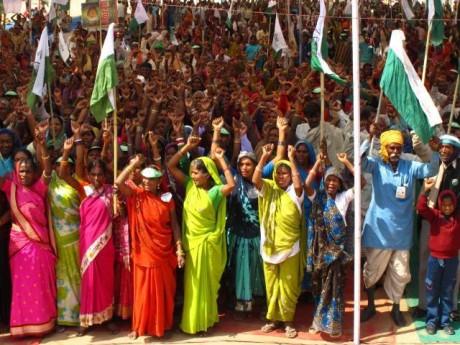 These days I am participating in Jan Satyagraha 2012, a civil resistance movement that aims to bring ownership of natural resources to the people.

The constant threat of losing one’s land and livelihood is the biggest of all the problems that exist in my community today.

Our government is in a hurry to set up new industries and for that it is acquiring land. But, often the industries do little for local people.

This is particularly applicable to mining industries that displace people from their land, but do not bring them any benefits in return.

Also, sometimes the land is very fertile and for a farmer it is disastrous to give it up. In most cases, they do not receive proper compensation.

What feeds this problem is that the government has been really slow to bring about land reforms. In the market, land prices have increased manifold in recent years. But in government records, this has not been updated. So, when the government pays compensation, it is far lower than the real market price. Also, millions of people, especially those living in villages and forest areas, have not been given a certificate of ownership, though they have lived there for generations.

A number of civil society organisations are working to highlight and end these problems, both at grassroot and policy level. But often, one thing is missing: coordination and cooperation among the organisations.

As the saying goes, a lone finger can be broken easily. But when five fingers make a fist, it is unbreakable. I have always believed in this saying very firmly.

This is the reason why I have chosen to take part in the ongoing civil resistance movement. The movement is inspired by Mahatma Gandhi’s philosophy and his historic Salt March in 1930. In the Salt March thousands of people had marched to the sea in Gujarat and made salt, to assert their right to produce or sell salt.

So far 100,000 people – mostly farmers, forest dwellers and Dalits – have joined Jan Satyagraha [which literally means civil resistance]. In October these people will take part in a 350km peaceful march that will begin in Gwalior, a city in central India, and end in New Delhi. They will demand equal control over natural resources so that they can maintain their livelihoods. 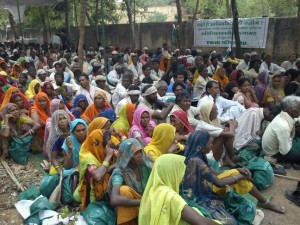 I have travelled to 16 districts so far in the states of Chhattisgarh and Madhya Pradesh to mobilise people in support of this movement. In every village, I have seen men and women of all ages coming together and discussing how they are losing their rights over the forest and land.

I am telling them to use CGNet Swara, a mobile reporting tool which allows them to tell their stories. I believe that this will add more power to their rising voices.

Led by a civil society organisation called Ekta Parishad [which translates as unity forum], the civil resistance movement has brought together dozens of other NGOs that believe that the real way to reduce poverty in India is through land and sustainable livelihood generation.

Will Jan Satyagraha be able to change the present governance structure by one long march or one movement? I don’t know. But to see an entire village coming out and demanding their rights in one voice over land, forest and minerals, is a sign of change in itself. And as a grassroot activist, I am going to keep working for this change.