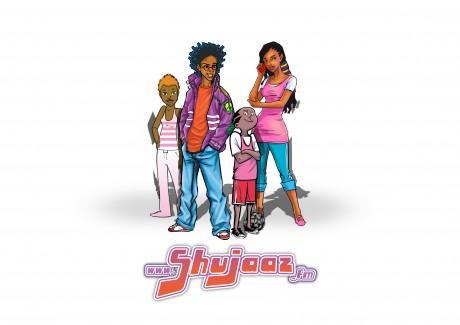 They say you shouldn’t change a winning formula. Sex sells – it’s been doing it for Hollywood, Bollywood and Nollywood for decades. And it goes for development too.

Shujaaz (‘heroes’ in sheng, Kenya’s street language, a mixture of Swahili and English) tells the story of Boyie, a 19-year-old from the outskirts of Nairobi. He’s finished school but he can’t find a job. His friends from school are pressuring him to join their ‘self-help group’, demanding protection money from the local community. But Boyie isn’t interested. And he hasn’t got time. With a talent for technology, he’s managed to build a secret pirate radio station in his bedroom, allowing him to hack into radio stations across Kenya, putting out a daily show, Shujaaz.fm, under the alias of DJB.

The stories and characters (beautiful Maria Kim who lives in a slum, football-mad Charlie Pele, who lives on a small farm, and rebellious teenager Malkia are fans of DJB’s show and call in to report their own adventures) are continued in a monthly 32-page comic, distributed free in the Nation newspaper and at Mpesa (mobile money) kiosks. Though their adventures young people get advice, tips, ideas and contacts about topics such as better ways of farming, small enterprises, job creation and ways to hold government to account.

The scale on which Shujaaz operates is quite phenomenal. Launched in early 2010, Shujaaz now reaches more than five million Kenyans a month. More than 16.5 million comics (600,000 a month) have been distributed – grabbed from the hands of those giving them out, passed around among friends, read and re-read at least ten times, according to research. The radio programme (Kenya’s only syndicated show) is broadcast on 25 different channels. 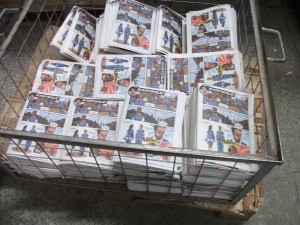 “The station’s audience is more than happy to tell DJB and his friends what they think,” says Rob. “Fans interact with the characters like they are real people and, because the story lines are similar to their own lives, the line between fact and fiction becomes blurred.”

DJB’s Facebook page has nearly 18,000 likes from people who interact with him on a daily basis and he receives 2,000 text messages a month from fans.  If a fan has a bright idea they are invited to the show to tell others about it.

Rob himself admits the tools they are using are not new – comic books and radio have been used as communication tools in development for decades. So how have they been so successful?

The team of young Kenyan writers and artists working on Shujaaz are the same age as their readers and listeners. The average age of the team is 22; the youngest is 17.

“We try to make sure our stories meet what they are interested in, which is sex and money,” Rob says with a smile. Kenyan boys (like boys the world over) mainly want to attract Kenya girls. And the girls won’t really look at them unless they have some money.

So Shujaaz gives tips on how to make money: starting a small business, ways to improve your crop, better types of seed, how to vaccinate your chickens, recipes for silage. It also tells readers about their rights, about health, governance, safer schools, stock-outs in hospitals, peace, tribal issues, blended with a little romance.

“We get 25 calls a week from guys asking for Maria Kim’s number,” says Rob.

Shujaaz is a parallel universe that reflects the reality of life for the readers and listeners – life in slums, small towns and on small farms – something almost unheard of in the Kenyan media.

Even the Kenyan Communications Commission seems to believe in DJB, tweeting @shujaaz to ask how they dare to run a pirate radio station!

In short, Shujaaz knows its audience (16- to 24-year-olds), speaks their language (sheng), and focuses on what they want (ways to improve their lives).

Messages are woven into the stories but getting the story right comes first.

“Our first goal is to entertain our audience and be cool and be fun. It’s not to deliver development ideas, that comes later,” says Burnet.

When Shujaaz won an Emmy award earlier this year, what pleased Rob the most was that they didn’t win it for their development work, they won it for the strength of the story.

NGOs and companies come to Rob and his team with information they want delivered and pay for the service. But they only take ideas and research that they know works. Google, for example, was deemed interesting and relevant to their audience. USAID’s message of abstinence wasn’t.

“We have an internal filter that makes us ask ‘does this story have a benefit to our audience?’ and if it doesn’t, we don’t do it,” Rob explains.

But does Shujaaz inspire people to take action?

1. Unaware of the problem

Stages one to four are tackled through the radio programme – listeners become aware of issues in the radio story as they go about their day. The next four are carried on in the comic book, where websites and phone numbers can be published, recipes and tips listed. Seven and eight are also the point at which Twitter and Facebook are relevant – the point at which followers can interact. And by stage eight Shujaaz offers push SMS, a service where people pay to be texted reminders and information such as when to vaccinate their cows.

“You have to be aware of where your audience is. You can’t skip a stage,” says Rob.

He added that he classes people into three groups: innovators (people who are ready to go as soon as they have the information they need), developers (interested but not convinced) and traditionalists (no desire to change). In a group of 25 you might have two innovators, four developers and 19 traditionalists.

What helped Rob and his team was the realisation that you only need to focus on the innovator.

Over time, by reinforcing the message and by seeing the example of the innovators, some of the developers might make the leap from awareness to empowerment and so on.

“It’s much easier to have a conversation [with an innovator],” he explains. “When we realised that it made our lives so much easier.”

“We celebrate people’s successes to fight against the naysayers,” says Rob. “In the comic we name people who have succeeded, people who have written in to say they’ve tried planting kale in a sack, or started a business, or are saving money.”

What I took away from all of this is that communication in development is critical. What’s the point in finding solutions to problems or carrying out research if you can’t get the information into the hands of those who need it? The key is knowing your audience and what they want. It sounds simple but very few people do it well. Shujaaz shows us how.