You are here: Home » Blogs & features » Panos London Blog » Under a Different Sky: a journey from North Korea 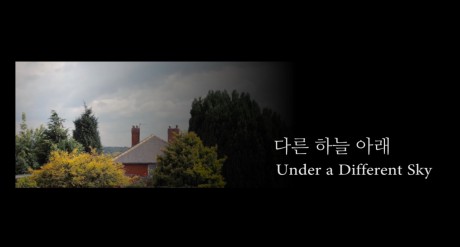 Under a Different Sky is a short film that tells the story of Yongmi Park, who escaped from North Korea and now lives in the North of England with her family. Read accounts about the background of the film from Yongmi Park herself, director Paul Harraby, Betsy Kawamura, who introduced Mrs Park to Panos, and Siobhan Warrington, Panos London’s senior advisor on Voice, who produced the film.

People in North Korea live like slaves in a gargantuan prison, not even aware of the phrase ‘human rights’.

The rights of women and children in particular are beyond description. Families are torn apart because of famine: children are abandoned, parents and children split up, and brothers and sisters separated. This is all part of North Korea’s reality, where no trees, not even a clump of grass, grow in the hills; it is completely barren like a desert. In order to find one meal to take away their hunger, North Korean children sneak into China. But since they cannot work they just beg in the streets.

Countless women have been sold as sex slaves to China. If they return to North Korea these women are battered by North Korean men who pour scorn on them, saying they came back impregnated by somebody else. In the training camps and prisons they work these women so hard that they miscarry, or they kill their newly born children in front of them.

I have wanted to tell the world about these atrocities. That’s what prompted me to participate in making the film.

I believe everyone has a secret. I thought I was going to keep the things I didn’t want to remember buried forever. But every day I hear the cries of pain and see the faces of children who wander through the streets looking for their mothers. I couldn’t suppress my memories.

Why is it that North Korean women cannot have the right to be happy? Today in China there are several hundred thousand women and children being pushed to hang on the edge of a cliff. These children should have the right to be comforted in their mothers’ arms just like other children in the rest of the world.

I met Betsy Kawamura when she was working to help North Korean women, and I was inspired by her selfless hard work and her deep empathy for their pain and sorrow. Since then I have joined her in sharing the pain and suffering of my people.

What I wish for the film is that even if people don’t get involved in any particular action or movement for North Koreans, they take interest and care about them. I came to participate in the film thinking that. I think it is better to have a thousand people than just one to share another person’s suffering; and by sharing their pain, I hope we can give hope and strength to North Koreans.

This project is just a beginning in that it is only about me and my family, what we have to say and wish for, but I hope it will reach out to all families in the world and give them hope.

North Korea is sometimes referred to as a hermit nation, and often when we think of this country our minds drift to their military might, state-sponsored displays of pageantry or the hysteria following Kim Jong-il’s death. However, Panos London and Betsy Kawamura wanted to engage the North Korean diaspora in the UK and empower Yongmi Park to tell her own story. I thought this was a valuable initiative in unearthing a hidden voice from this ‘hermit nation’, and it showed a tremendous amount of courage by her and her family to take on this project.

We agreed on ‘Yongmi Park’ as a pseudonym, in order to protect her and her family from potential reprisals. It was a challenge to find a way to feature Mrs Park in the film without identifying her. I chose to focus on her eyes as I thought this device would be a good way to protect her anonymity, and Mrs Park was happy to go ahead on this basis. Mrs Park’s interview and the filming were scheduled to take place over two days. When we arrived at Mrs Park’s house we spent time discussing areas that would and would not feature in the film with the help of an interpreter. It was important that Mrs Park had ownership of the film and had the confidence to tell her own story.

During the filming, I was overwhelmed by the family’s generosity, openness and resilience and it occurred to me that ‘family’, in the sense of pulling together in adversity and being strongest as a collective, was at the heart of Mrs Park’s life now in the UK. This theme became the counterbalance in the way the film was told, as we see Mrs Park and her family together and united in their day-to-day routine whilst learning about her unsettling past. Mrs Park’s story is vast and tragic, and one of the main challenges for me was to edit down her account to a much shorter narrative that would best reflect Mrs Park’s experiences, while ensuring it was grounded in her existing life. The title Under a Different Sky refers to the life she managed to escape in North Korea and China, but it also refers to her life here and now as she continues to come to terms with her past.

A few years ago I came across a benevolent South Korean pastor who invited me to accompany him to his ministering duties for North Korean refugees residing in Northern England. There I met some incredible refugee families and individuals who were willing to speak to me about their backgrounds and the deep humiliation they had felt during their escape and exile in China. When we drove to our final destination for that day, I met Yongmi Park at her home where she agreed to share her story with me. I had very mixed feelings, ranging from happiness that she had agreed to share her story with me, to immense guilt and personal shame for asking her to share something that was intensely painful. This was the genesis to the making of this first documentary of her family.

According to research by various NGOs analysing North Korea issues, there are around 23,000 refugees from the Democratic People’s Republic of Korea (DPRK) living in South Korea and approximately 800 in Western Europe, with the majority in the United Kingdom, Germany and Netherlands, and a few in Scandinavia. Half a million North Koreans are thought to have crossed the border between North Korea and China since the mid-1990s and it is estimated that a further 150,000 to 200,000 are held captive in North Korea’s gulags.

Most North Korean refugees in the UK are thought to have arrived around four to five years ago. Many of the families and individuals I have met seem to still suffer acutely from PTSD (post-traumatic stress disorder) and other physical and psychological ailments associated with imprisonment, torture, trafficking and other forms of violence experienced in North Korea, China and other countries whilst in flight.

Fortunately today there is journalistic coverage and analysis of North Korean human rights violations, and this, along with current investigations at the International Criminal Court in The Hague, will hopefully strengthen awareness of DPRK issues.

I hope that this film also encourages and galvanises the survivors of North Korean prison camps to speak out and be heard. This film should catalyse debate on the need for improvements to women’s rights, and encourage support for the healing process from human trafficking and the sub-human conditions in both Chinese and North Korean prisons. I hope that Under a Different Sky will leave a legacy for the next generation of North Korean children born in ‘free’ Europe and other countries outside of the DPRK, to live under brighter skies and close the dark history of DPRK.

At the time we were in discussions with Betsy Kawamara, founder and director of Women4NonViolence about a potential communication project with North Korean refugees living in the UK. Betsy had suggested that we focus on recording and communicating the story of a North Korean woman called Yongmi Park as a positive step towards encouraging other North Korean refugees to speak out safely about their lives. And this became the focus of Paul’s residency with Panos London.

It started off feeling like an even greater challenge than making a film in 72 hours! We were asking Paul to make a film about a North Korean woman who couldn’t be identified and who would be sharing her story in Korean. Plus there was the strong directive from Panos London to take a collaborative approach, ensuring Mrs Park was central to decisions about the film before, during and after the filming. The aim of the film was not to fulfil any advocacy role for Panos London, but to provide an opportunity for Mrs Park to tell and to share the story she wanted to tell, with a wider group of people.

Paul is a thoughtful and creative director, who has shown great sensitivity and respect for Mrs Park, her family and her story throughout the project. The additional people he secured to work on the film have worked with the same ethos.

Under a Different Sky is the result of the hard work and commitment of a group of highly skilled people: Anika Chiaventone for camera work, Ciara O’Grady for editing, Jae Won for interpreting during filming, Kyeong-Soo Kim for translation services during editing, and Natalie Sedgwick and Martin Ash for the film’s musical score. Clodagh Miskelly and Anna Egan from Panos London provided advice throughout the process.

Our greatest thanks and respect goes to Mrs Park and her family for engaging whole-heartedly in the project and sharing part of their lives with others.