These narrators describe how ethnic divisions, weak and corrupt institutions, tensions over land and homes create exclusion and poverty. 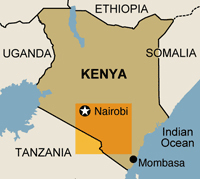 Despite education reforms, three years of national economic growth (2004-2006), and significant efforts to tackle HIV and AIDS, Kenya faces major political and economic challenges. These include ethnic divisions, weak and corrupt institutions, tensions over access to key assets such as land, and neglected infrastructure.

Moreover, Kenya contains extreme wealth as well as poverty. As these interviews illustrate, Kenya’s rural and urban poor feel strongly that the rich and powerful are denying them even the most basic human rights, including in some areas the right to clean water and sanitation. The events of early 2008, which followed Kenya’s disputed election results, showed how close to the surface this sense of injustice lies. 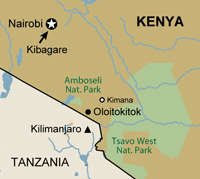 The testimonies were collected in two locations: rural Oloitokitok, close to the Tanzanian border, and Kibagare, an urban slum on the outskirts of Nairobi, bordering one of the capital’s wealthiest suburbs.

Oloitokitok administrative division is in the Rift Valley Province in the south of the country. Most of it is savannah grassland, where the pastoralist Maasai graze their livestock, organised into group ranches that manage land communally, flanked by Amboseli and Tsavo West national parks.

Through tourism, the ranches earn about 1 million Kenyan shillings annually, most of which goes towards educational bursaries. Since 2003, primary education has been free in Kenya and the number of pupils has almost doubled. Secondary education, however, was not free when these interviews were gathered, preventing many narrators’ children from completing school. In February 2008 the government announced that it would cover tuition fees for secondary education.

A small number of Maasai have taken up farming, especially on the fertile volcanic soil near Mount Kilimanjaro. However, many people struggle to make a living. In some areas, lack of access to water is a major problem. Drought often causes crops to fail and even when there are better harvests, bad roads and the absence of nearby markets make it difficult to sell any surplus.

Oloitokitok’s population of about 130,000 is growing fast. People from other parts of Kenya have bought land from the Maasai and Tanzanian migrants come to find casual agricultural work. However, the district has poor infrastructure and lacks amenities, with only Oloitokitok township having electricity.

Maasai culture, although undergoing change, is still rooted in tradition. At its centre is a strong attachment to cattle. Certain practices surrounding initiation into adulthood continue, although Maasai people today also interpret their traditional roles and customs in different ways.

Part of the Kangemi settlement on the outskirts of Nairobi, Kibagare slum borders Loresho Estate, one of the richest suburbs in East Africa. Its population includes all Kenya’s ethnic groups. Some of the worst violence following the disputed December 2007 elections took place here and in other slum settlements.

Life for Kibagare’s 20,000 inhabitants is unhealthy, dangerous and chronically insecure. The slum is built on land owned by the government and the flimsy dwellings – made of scrap materials – are technically illegal. Demolitions by the authorities occur on a regular basis.

Basic amenities such as water, toilets, roads and electricity are almost completely absent. Lack of sanitation is a particularly serious problem: people are forced to defecate into plastic bags (‘flying toilets’), which are then casually disposed of, causing significant health risks and undermining people’s dignity.

Unemployment is endemic, particularly among young people, and for most, life is a constant search for casual, menial jobs. For women, ukahaba – “taking up with any man… as long as he can feed your children or pay their school fees” – is sometimes the only economic option.

Kibagare has just one school, one mosque and one church. A single health facility in Kangemi serves the whole area. The gates in the wall between the wealthy Loresho estate and Kibagare are locked every evening, effectively closing the road. If there are medical emergencies at night, Kibagare inhabitants have no access to a hospital.

Conditions in Kibagare – with no sanitation or permanent housing – make every day a battle against squalor and insecurity. Lack of paid work further undermines people’s self-esteem. Political representatives are seen as corrupt and many narrators say that they have little or no hope in government.

Yet despite their overwhelming poverty, they have not lost hope in themselves: with a small loan or the opportunity to learn a skill or a trade, they say, a better future would be possible.

Lack of infrastructure and political indifference also hinder development in Oloitokitok. Electricity and water supplies – except in the township – range from inadequate to non-existent. The Maasai are struggling to hold on to their cultural pride and heritage while developing new livelihoods and ways of living, but the farming they have been encouraged to take up to reduce their dependence on livestock is itself a fragile livelihood: drought and poor infrastructure make harvests meagre and marketing difficult.

These narrators are frustrated at the inequality they see around them – not just of resources but of opportunity. Hardly any are able to take advantage of training, development initiatives or small loans that would allow them to help themselves. They describe how lack of work erodes their dignity and their children’s values, and makes people susceptible to taking up prostitution or small-scale theft simply to survive.

Mary, from Oloitokitok, feels that if they had education and jobs, they would have much more chance of becoming “a good person”. By commenting on the way poverty distorts people’s behaviour and perceptions of themselves, she highlights one of its most unacceptable human costs.

Introduction is a key theme of the Living with poverty: Kenya oral testimony project.