Mozambique, in south-east Africa, has seen political stability and economic recovery since the end of its devastating civil war, yet it remains one of the world’s poorest countries (168th of the 177 nations on UNDP’s 2007 human development index). Average life expectancy is 39 years. Less than half of adults can read and write, and the infant mortality rate is among the highest in the world. Severe droughts and floods – a feature of Mozambique’s climate – and the aftermath of prolonged conflict have hindered the country’s development.

Mozambique gained independence from Portugal in 1975, after a 10-year armed struggle. This was followed by another 20 years of civil unrest as the ruling party Frelimo (Front for Liberation of Mozambique) was violently opposed by RENAMO (Mozambique National Resistance Movement), which was backed by the then apartheid South Africa. Thousands of people lost their lives during the war, millions were displaced and infrastructure was destroyed. A ceasefire was agreed in 1992 and the country’s first free elections held in 1994.

Since 1997, official statistics show the economy to have grown at a rate of around 8% per year, leading some to view Mozambique as a ‘success story’ in African development and pro-market reform. But poverty, while declining (most recently under the government’s poverty reduction strategies), has not fallen as quickly. Economic growth has yet to be widely achieved with regard to employment creation and income generation, particularly in rural areas.

The vast majority of the country’s 18.5 million population rely on subsistence agriculture for their livelihoods, so land is crucial for people’s survival. Land also has strong social and cultural connotations; many of these narrators proudly identify themselves as ‘camponês’, or workers of the land. Although the government remains highly dependent on donor aid (which accounted for over 60% of the state budget in 2007), it has resisted pressure to privatise land.

Yet despite having some of the most pro-poor land laws in the world, recent government support for private investment has at times eroded the rights of the rural poor. UNAC (União Nacional de Camponeses), the national small farmers’ movement founded in 1987 by farmers themselves, and which now has over 32,000 members, is working to raise awareness on land rights.

Meanwhile the environment is deteriorating due to intense pressure on forests, fertile land and water supplies. And when the recurrent floods and drought are particularly severe, large numbers of people are forced to migrate from the rural areas. They seek jobs in Mozambique’s coastal and urban settlements, as well as in neighbouring South Africa, where many families have at least one member at work.

The testimonies were gathered in two sites: Marracuene, just north of Maputo, and Mabalane, 200 kilometres from the capital, on the Limpopo River. 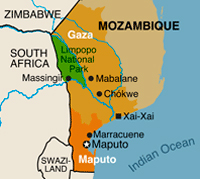 Marracuene is the principal town in Marracuene district, located 30 km north of Maputo on the Incomati River in Mozambique’s Maputo Province. Its beaches made the district a popular tourist destination during the colonial era but during the civil war the area was neglected and many of its inhabitants fled to Maputo in search of food and work.

Today the community suffers from serious poverty and under-development, despite its proximity to the capital. District figures show an HIV prevalence rate of over 20%.  Land disputes are common, as people from Maputo seek land for houses or small farms. Many communities depend on remittances from migrant workers in the cities or South Africa and there are a high percentage of female-headed households. Many of its residents still frequently travel to Maputo to sell goods or find work.

The second site is much further from the capital. Mabalane district in Gaza province is 200 kilometres from Maputo. The fertile valleys of Gaza province, watered by the Limpopo River and its tributary, the Changane, were among the first to be resettled in the 1990s after peace returned to Mozambique. Grain farming is widespread and many people keep cattle, which are important for animal traction as well as a symbol of wealth.

However, most of the narrators come from communities that border the Parque Nacional do Limpopo. This national park covers 10,000 square kilometres of arid land, touching the districts of Chicualacuala to the north-west, Mabalane to the east and south and Massingir to the south-west.

It now forms part of the Great Limpopo Transfrontier Park, which spans the borders of Mozambique, South Africa and Zimbabwe. Mozambique’s wildlife population was severely depleted during the civil war and a concerted effort has been made to restore the country’s game reserves.

The people living on the edge of the unfenced park, however, have had major problems with wild animals consuming their already meagre harvest, and have lost access to building materials and other forest products. Drought and other constraints on farming mean these communities are also characterised by large-scale migration to South Africa.

Mabalane is significantly less well-served by health and education services than Marracuene. The reason they lack nurses and teachers, narrators suggest, is that people with skills don’t want to live in such a remote rural area “with people who only live by means of the hoe” (Rafael).

Despite the many obstacles to development, Mozambique’s emergence from the horrors of civil war has meant many people are forward-looking and full of determination for a better future. However hard their lives are now, say some narrators, they are better than in the war years. Nevertheless, a battle remains. “That armed conflict is over…” says Pedro. “But there is another struggle” he warns, this time against “absolute poverty.” Some of the women fear that this is a battle they are losing.

Several narrators mention government support and awareness campaigns on the value of cooperatives and the more formal small farmers’ associations – organizações de camponeses – as well as on adult literacy and equal rights. A significant proportion says they are striving to attain these goals and have seen improvements both in their communities and in the status of women within them.

But one of the longest-lasting legacies of the war has been disruption to family networks due to death, disability (mines were widespread) and displacement. These accounts make clear that this has weakened one of the most important sources of support for the poor – the family – and that these relationships are now being further eroded by labour migration. Many women talk of husbands and sons who went to South Africa and never returned. Young women also leave home for work. Many of them have little option but to work in the sex industry in cities, tourist resorts and South Africa.

The spread of HIV and AIDS is a common topic in both communities, with several narrators pointing out that the impact of the disease could completely undermine the painstaking advances in development that have been achieved: “We are going backwards,” says Palmira. However, public information campaigns seem to have been successful with many narrators, who talk with compassion about those who are HIV-positive.

A few narrators feel that progress will require shifts in attitude as well as provision of resources. For Pedro, ideas are as important as any tangible inputs: “What we lack most is not only technical knowledge; it is experience, of course – exchange of experience…” For him, having an open mind is fundamental to development, and better communication is part of that: “the majority of poor people do not have access to a means of expressing what they feel; they are not heard.”

He argues in particular for more communication between generations. Young people, he says, no longer appreciate the experiences of the older generation. Now they have a little education, they do not want work in agriculture, but they cannot find other jobs. Both sides need to be open to debate, says Pedro, so the next generation can take the best from the past, and build a more secure future.

[A note on currency: Mozambique’s unit of currency is the metical.  In October 2008 50,000 meticais equalled about 2 US dollars]

Introduction is a key theme of the Living with poverty: Mozambique oral testimony project.