You are here: Home » Oral testimonies » Living with poverty: Zambia » Introduction to the project

These testimonies highlight the human and economic costs of the HIV epidemic, and the ways in which it can be both cause and consequence of poverty.

Zambia is one of the world’s poorest countries and, as these interviews make clear, people’s economic difficulties have been exacerbated by HIV and AIDS.

It is estimated that 15.9 to 18.1 per cent of the population aged between 15 and 49 years is HIV positive (UNAIDS, 2006). Not surprisingly, this has affected agricultural productivity and taken its toll on food security. 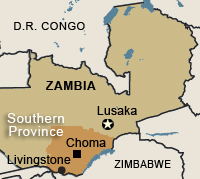 These testimonies are from Choma District in Zambia’s Southern Province. Most of the narrators are Tonga, one of Zambia’s seven main tribal groups. Choma is an important district for agricultural production; prevalence rates of HIV are high.

The interviews were carried out in two sites: the villages of Hagwanama, Hamusunse and Sikalyabwanda in Kanchomba area; and Mwapona compound, a more urban community on the fringes of Choma town.

As in most of Zambia, the majority of households here depend on activities related to agriculture, including crop production and livestock rearing. Other important income sources are wage labour (‘piecework’), charcoal burning, trading, and various crafts.

Households with people living with HIV and AIDS find it hard to participate in wage labour as their time is limited due to taking care of the chronically sick. For these families, petty trading is more feasible.

The HIV epidemic has left many orphans, the majority of whom are cared for by female-headed households and grandmothers. In fact, as these testimonies illustrate, the HIV prevalence rate belies the true impact of the epidemic: a far greater number of people is affected by the presence of the disease.

widows and orphans Many speak of how their communities do their best to care for the most vulnerable – but social support systems and individual resources are clearly being pushed to the limit.

There are two dominant themes in these testimonies – the impact of HIV and AIDS and the collapse of farming. Most of the narrators’ concerns are interlinked and reinforce each other in a vicious cycle of impoverishment.

Agriculture has been devastated by poor rainfall, but these narrators argue that falling productivity also reflects the widespread loss of livestock to disease, and a consequent lack of manure and ploughing power.

With so few jobs available, no one can earn enough, or dares to take out a loan for better tools, new animals and other inputs. As a result, food insecurity is a real issue: Ruth is one of many who say some people “just eat once a day”.

Prolonged drought has eroded people’s ability to survive from the land; the scarcity and poor quality of drinking water has also undermined their strength and health. At times, Anna says, “We have to beg for water from those that have it…” Indeed, the difficulties involved in sheer survival make it hard to find the time or energy to sustain clubs and other community initiatives.

Food aid is no solution, say many of the narrators, because people need work, not “mealie meal once in a while”. Gilbert is clear: “what makes people in Mwapona poor is lack of employment…”

This is where cause and consequence become inextricably linked. As Ruth says, “If we were working, we would not have high prostitution levels…”. Widespread sex work increases people’s vulnerability to HIV, which in turn has robbed the community “of its able-bodied productive men and women…”.

Despite these problems, narrators describe some successful activities: growing vegetables and raising poultry, making the most of a new small dam, building a community school, caring generously for AIDS orphans and widows, and taking on a variety of small jobs and trading opportunities to keep children fed, clothed and in school.

Most feel that their political representatives have let them down, and that their lives would be improved if they just had better basic facilities, and assistance with agriculture and income-generation. People are not lazy, say several narrators, but they need the basic tools to work and improve their lives.

Introduction to the project is a key theme of the Living with poverty: Zambia oral testimony project.