You are here: Home » Our work » Themes » Information society 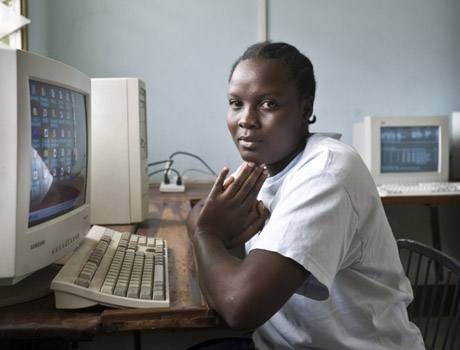 Our goal is for all citizens in developing countries to have fair, easy and affordable access to information and communication tools. We are especially concerned that information and communication technology (ICT) projects should look beyond technology and logistics to ensure that they are socially inclusive and that they deliver services that meet the needs of poor communities.

We consider the pillars of an inclusive information society to be:

Our work currently focuses on developing new research methodologies that look at inclusion and exclusion in the information society, along with strategies to counteract the imbalances. For example, we are exploring the success of telecentres as spaces where the public can access the internet, telephone and other ICTs.

ICTs and development in Zambia:
challenges and opportunities

Information and communication technologies (ICTs) are increasingly important in achieving development goals and promoting citizen participation. Zambia is one of a number of countries in the Southern African region that have sought to include ICTs in their national development plans.

All human development is based on the acquisition, spread and use of knowledge. But unequal access to knowledge can create injustice.

In this article an editor from Panos London offers some of the topics that you could explore in relation to banking, money transfers and ICT.

Women in the information society

Many policy-makers believe ICTs can help women overcome dependence on men by providing employment. Here a Panos London editor offers ideas of how to develop a story around the topic of women in information society.

For many people, communication facilities are unreliable, slow and costly – and wireless technology could transform the situation.

Exploring the controversy surrounding the Digital Solidarity Fund, which aims to help bridge the digital divide.

Are telephones important for development? This report describes the findings of a new study by leading telecommunications researchers, based on case studies in India, Mozambique and Tanzania.

Who rules the internet?

Some argue that the current system of internet governance keeps the internet free and out of the hands of governments. But others say the system isn't transparent or accountable enough.

Why calls in Africa cost more

A cheap and easy way of receiving satellite signals could revolutionise communication in remote areas of Africa. So why aren't governments rushing to adopt this new VSAT technology?

Bridging the digital divide risks being undermined if basic telephone connectivity is not first made available.

Practical initiatives that give developing countries a louder voice in the international ICT decision-making process.

Uganda Speaks gives Ugandans a platform to tell their side of the story as well giving people a chance to highlight stories of positive change. Founder Javie Ssozi spoke to Lilly Peel, about KONY2012 and about how mobiles and social media are giving people the power to tell their own story.

Great news – Bhan Sahu, our blogger from Chhattisgarh in central India, has been awarded a fellowship with the citizen journalism group CGNet Swara.

Read about what some of our journalists have to say about their experiences of writing for Europe and visiting national newspapers, as they reflect on the successes of the Linking Southern Journalists project.

“The growth of social media has helped established news organisations such as the Guardian, which we visited, make it possible for voices from other parts of the world to be heard amid the economic crunch.”

“One could say it was a reaction typical from a journalist, but it took me a long time to believe the trip was true. I thought that being invited to meet editors from European newspapers – with all expenses paid – was just too good to be true.”

Ana Aranha works as a freelance journalist and for the investigative journalism agency Publica, set up by former Panos London intern and journalist Natalia Viana. She joined the Linking Southern Journalists project in 2011, and spoke to Kate Ixer about her participation in the project.

One of the world’s largest funders of science research has given its support to a growing campaign for publicly-funded research papers to be shared openly online.

Maimoona discusses how the recent Annual Day celebrations in Pakistan have brought together local families and their children.

Mary Madiga blogs about how she became involved in politics and her dedication to democracy.

As Maimoona laments another student whose education has come to an end prematurely, she reflects on the importance of teachers and parents communicating well for the benefit of the children.

Our new blogger Mary Madiga, who was the first Dalit girl in her community to go to school, reflects on changing religion and being educated when social stigma was pushing against her.

Disadvantaged women and girls need to be involved in information technology from the design stage, says Clodagh Miskelly, who calls on ICT developers to make this happen.

As part of the Breaking Barriers series, we spoke to Rebecca Namayanja, who is taking on the traditionally male-dominated job of being a fisherwoman in Uganda.